"Forever Is A Doorstep" is The Heliotropes's first album. Michael Bennett gave it a long, hard listen. Read this to see what he thought. 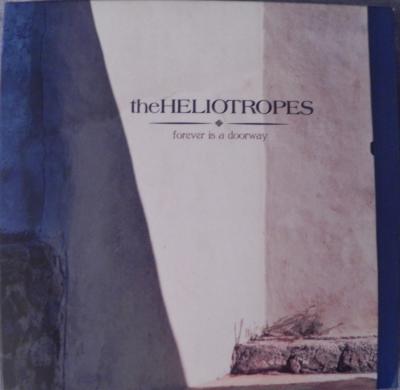 Upon listening to "Forever Is A Doorway," the first album from The Heliotropes, fans of the band may be shocked. Not by the quality of the songs, but the clarity.

After seeing the band play live for so long the album brings the vocals and lyrical stylings of Katie Chriest to the forefront. The music is beyond complimentary, but the band made a conscious effort to match nuance with strong vocals.

Where most albums are built from the ground up, laying down a drum track and building around it, this album was recorded live in studio. Over two days of recording, Chriest, guitarist Sheldon Peterson, bassist Dave Blaetz, and drummer Alan Chaffee laid down the tracks together. One day was spent with Chaffee behind a drum kit, the next session he played percussion with Chriest and Peterson.

The album is full of great musical flourishes, but seems built entirely around the songwriting of Chriest. Her lyrics, vocals, and approach are relatable to 1970s acts like Carole King, Carly Simon, and Emmy Lou Harris. It is as if someone found her on Tin Pan Alley, flew her to L.A. to jam with great session musicians and make her first album.

The songs have been part of The Heliotropes repertoire for some time, and come direct from Chriest's own notebooks.

"Sheldon and I were together about a year and half before the band happened and the process was I didn't play guitar and he didn't sing so we thought 'oh why don't we start a duo where we both sing and play guitar,'" she said. "So I would write these songs and arrangements then go to Sheldon's house and he would make them something that somebody would want to hear again."

The process proved so enjoyable, it led to the marriage of Chriest and Peterson, and there are tracks on the album to signify their love. The eight-minute track "Such Like" was written by Chriest for Peterson, and includes a vocal blend of the refrain "love."

All of Chriest's lyrics are very personal and accessible. She sings of love and loss and the delights of existence. The mood is so positive, even when touching on the sad parts of life, there is a bend to the positive and the listener is left with the feeling that everything is going to be all right.

"Katie wrote songs, and were finished the way they were, but she also was kind or generous enough to throw me the box of crayons," Peterson said. "That's probably what I do better than anything is just try to color things."

And color he does. The guitar throughout the album is impressive. His lead work on "Spanish Wine" and the title track "Forever Is A Doorway" is exceptional. The notes are very clean, without sounding over produced.

Blaetz bass is steady without being overpowering. His playing is best reflected on the tracks "Last Frontier" and "Instead of Wrong." Peterson, who has played off and on with Blaetz since 1980, could not praise the work enough.

"Dave's playing is so clean; he doesn't try to do too much," he said. "He provides the perfect lines to play over."

Chaffee's contribution cannot be understated. He is the perfect compliment on the skins. His easy style and gentle runs reinforce the power of the vocals and accentuate the guitar on every track. The final track, "Midnight…Magic Trees" holds a somewhat hidden track of percussion and vocals that captures the true feel of the band.

The album was recorded and mixed at Maerick Studios by Mark Graziano and Eric Buman, who did a fantastic job bringing out the performance of each member of the band. After the two recording sessions and all the over dubs, the album went through eight mixing sessions to bring the sound to exactly where the band wanted it.

There aren't many missteps on the album. There are small points where Chriest's vocals feel forced or reach too far for technical perfection rather than just simply singing. But the pure delight of the album does not give the listener time to dwell on any imperfections.

"Forever Is A Doorway" is a great Sunday morning album. It is mellow and enriching and the perfect companion to a morning of soft slow recovery from the night before.

The Heliotropes will be playing live on May 20 at the Edinboro Arts and Music Festival and May 27 at the Brewerie.