Hell is Other People: A Review of mother! 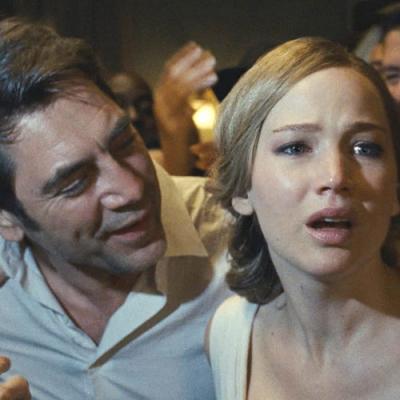 Darren Aronofsky's (The Wrestler, Black Swan) new film mother! is frustrating, confrontational, deeply symbolic and absolutely brilliant. The film stars Jennifer Lawrence and Javier Bardem as a married couple in the process of rebuilding their recently destroyed home and suddenly find themselves the unwitting hosts to a series of increasingly bizarre guests. These guests proceed to become very bothersome for the poor couple in ways that range from annoying, to surreal, to horrifying.

The film seems to have been marketed as a horror film, but if people are looking for traditional scares, they are sure to be disappointed. mother! has some tense and terrifying moments to be sure, but at times it is also oddly funny, often feeling more like an absurdist farce than a straight horror film. The film is also heavy with religious symbolism. Though an atheist, Aronofsky has always been deeply concerned with questions of faith and the nature of God and mother! might be his most religiously concerned film to date. While superficially a story about marital strife, the film is far more interested in humanity's relationship with and interpretation of the God of the Bible, with the partially destroyed house becoming the stage for all of humanity's flaws and monstrous tendencies. Without giving too much away, the film is practically a scene-for-scene retelling of the Bible.

mother! will undoubtedly be a hugely polarizing film, but if you're more interested in symbolic storytelling and questions of faith than with a traditional story, this film is a must-see experience. ­— Forest Taylor