Here's Looking at You

Artists take on the selfie. 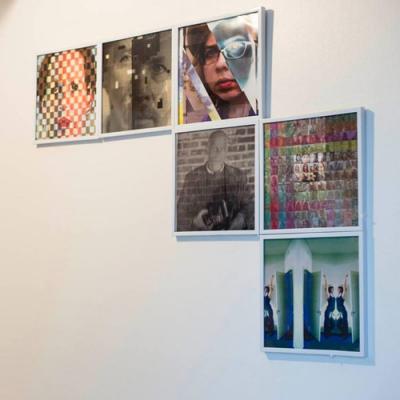 In the quirky but intimate space of 319W2 (a garden shed in the backyard of Larry Walczak's abode at 319 W. 2nd St.), the latest from his Eyewash Projects is FOTO BOOTH, an exhibit asking photographers for a "selfie" that focuses "on the psychological states of mind that transcend the surface of literal photo representation." The result is 20 eight-by-eight inch works clustered in three groups by 20 artists, from both New York and Erie.

Inherent in a self-portrait or even a casual selfie, is a revealing of some inner self along with the physical exterior. And most of the artists here graciously took the risk to give us bigger windows into their cerebral ecospheres. Others played it a little too safe.

The few disappointing works were straightforward and simple — sometimes a good thing — but they came across here as "typical" selfies, just more artfully arranged. They offered little but a superficial look at the artist, suggesting glamor shots from a fashion magazine rather than psychological introspection.

The rest, though, are deeper looks, sometimes fragmented or conceptual, which pull the viewer in for a closer examination. Phil Beuhler harks back to his early days as a photographer with a tonally washed-out shot of himself squinting behind his first camera, and Bryan Hiott offers a similarly obscured image, as if he were a ghost caught in mid-emergence from the wall behind him.

Local artists Carol Posch Comstock and Greg Zbach deliver digitally altered pieces writhing with color, and both Kris Risto and Destiny Dombrowski offer their faces in organic finery. Risto's face materializes up from a green field with yellow flowers, and Dombrowski's subdued roses frame her face, suggesting the lushness of her mind, or the beauty found there. On the other hand Michael Tkach's straight-on unadorned approach is amusing and disturbing at the same time, something we've come to expect from Tkach.

Working within the confining space of eight-by-eight inches can be challenging, but it also offers the possibility for creating a detailed work that might be too difficult to achieve on a larger scale. Patricia Fabricant and Jessica Sutton pull off wonderful collages that splinter their faces, creating motion and texture. Fabricant weaves paper in a checkerboard pattern that displaces her features just enough to set things ajitter, while Sutton juxtaposes slices of different photo techniques in diagonal sections that intimate conflicting depths.

The selfie's place on social media makes it feel disposable, just another flash of celebrity in our visually hyperactive world. In fact, studies claim that one million selfies are taken each day, while others suggest a whopping 93 million, on average, per day. But as early as the fifteenth century, artists in the western world were making self-portraits, so the concept is not as new as it seems, except now everyone can do it. The art world has noticed this development and is starting to mine the possibilities of this new form of portraiture.

If you couldn't make it to the Saatchi Gallery in London for its big "Selfie to Self-Expression" show earlier this year, swing on by FOTO BOOTH in what I lovingly refer to as the Art Shack. Here you can nibble on the arc of human emotions all while standing in one spot.