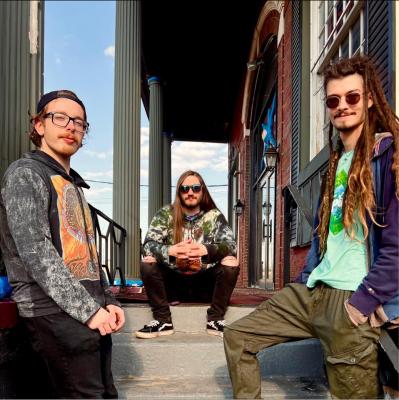 If you've ever felt like you had to choose between rock music and reggae, there's a band out there for you and they're ready to release their full-length, self-produced album titled From Rivers to Oceans on Oct. 7.

Erie local band Higher Vibration melds together rock and reggae music to create arguably one of the most unique sounds in town. They are serving up 8 tracks featuring Kyle Hammer with vocals and guitar, Jake Van Hooser on the bass, and Derek Sloppy on the drums.

After some consideration and rebranding of their music, Hammer explained that the band –  previously known as "Human Delusion" – realized that the name no longer aligned with the band, and thus, Higher Vibration came to fruition. Together, they worked hard to create a name, sound, and message that resonated with who they are as people and went on to begin production of From Rivers to Oceans.

"To save money, I spent hundreds of hours watching youtube tutorials on how to record and produce an album." Hammer says, "Once I felt confident that I could produce something at least somewhat professional sounding, I invested in a new computer, a decent mic, some nice studio speakers, and created the upcoming album."

Hammer says he and drummer Derek Sloppy have been playing music together since early 2015, later meeting bassist Jake Van Hooser at a show and discovering a shared interest in music genres.

Higher Vibration has also been running merch giveaways and sharing process clips on their Facebook page in preparation for this release, which you can check out at facebook.com/highervibesound. — Cypher Eihwaz