Holler if You Want to Hear The Ghost of Paul Revere

The Ghost of Paul Revere takes the stage as part of the UPMC Sunset Music Series. 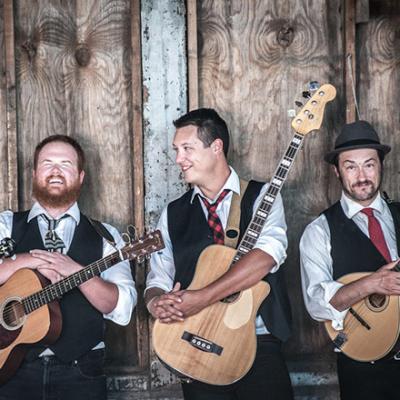 The Ghost of Paul Revere's rollicking, folky tunes will soon carry the band back to Erie where they are excited to take the stage as part of the UPMC Sunset Music Series. The band brings its raw authenticity to headline at Beach 1 on Presque Isle, supported by Max Garcia Conover – one of the band's "favorite" musicians according to Sherry Griffin, lead singer and guitarist. "It sure sounds like we're going to have quite a bit of fun on the beach that day," he adds.

This self-described "hollerfolk" band is comprised of a group of Maine-based childhood friends. Max Davis plays banjo and contributes to the thoughtful, harmonious vocals; Sean McCarthy is on bass (he also sings and rounds out the tight three-part harmonies); and Matt Young plays harmonica and mandolin. So what is hollerfolk, exactly? Griffin explains that the sound "takes inspiration from old field hollers and traditional American folk music with a fair amount of rhythm & blues and rock 'n' roll." The band showcase their sweeping, melancholic – and, at times, foot-stomping – sound on their Spotify page. A standout track, "San Antone," places jangling guitars as punctuation over gorgeous, echoing harmonies; in this track, the bluesy, folksy vibe is palpable, and a hefty dose of mid-song harmonica gymnastics add some homegrown Americana.

The Ghost of Paul Revere open up their souls through their music, carrying the essence of several American places.

It's clear The Ghost of Paul Revere open up their souls through their music, carrying the essence of several American places, straddling eras, and combining genres to create their distinctive sound. "I think nothing compares to the honesty and emotion of old time roots music," Griffin says. "The musicians have nothing to hide behind and their passion fuels the energy of the performance" – something that will be demonstrated when they take the stage. – Miriam Lamey