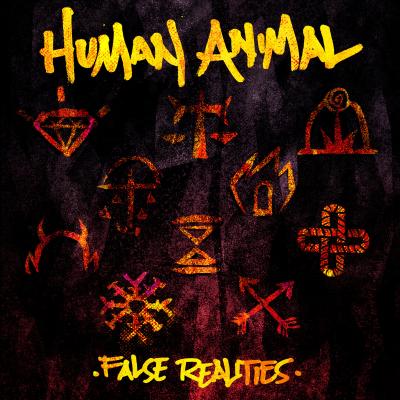 Like all of the EP's and split 7" records released by Erie's hardcore heroes, Human Animal, the band's first full-length effort is recorded and engineered by the band's drummer, Bobby Williams, and released under a record label run by vocalist, EMS - truly exemplifying the DIY ethos of hardcore and punk rock. False Realities culminates the Erie band's experience over their "first four winters" — not to mention the decades of Erie hardcore history their members have under their belts — with the longer track listing allowing room for experimentation. The opening song, "Perfect Person," cuts right to the chase, skipping a gratuitous mosh intro riff and getting straight to the meat of their metallic hardcore sound. A few tracks in, the band starts to show their more melodic tendencies on the tracks "Flowers in the Graveyard" and "Hellfire," with the latter showing some hard rock influence with the ending guitar solo. From there the songs pick up the pace again, full of two-step mosh parts and singalongs, highlighted by the high-energy, Suicidal Tendencies-esque single "The Pact". The penultimate song "Bastards of the North" brings back some of the hard rock inspiration heard earlier in the album, an ode by singer EMS to the early days of playing shows between Erie and Cleveland, with a similar vibe to the hardcore classic "Warriors" by Judge. Arguably the heaviest song on the album is saved for last with the track "F.E.A.R." (False Evidence Appearing Real/Forget Everything And Run), and the band completes a new chapter in a long history of Lake Effect hardcore. — Tommy Shannon