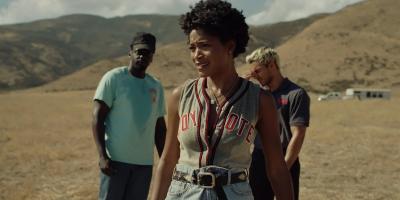 After making just two films, Jordan Peele has already fully established himself as a great horror director, telling creepy tales that also work amazingly as metaphors for deeper societal issues. While Get Out and Us both brilliantly intertwined their themes with their stories, his newest film Nope contains so many metaphors that they threaten to overtake the film. The result, despite some very impressive filmmaking, is a movie that gets bogged down by its own ambitions.

The plot follows Otis Haywood Jr. (Daniel Kaluuya) and his sister Emerald (Keke Palmer) as they try to keep their Hollywood horse ranch from going under after their father dies from mysterious causes. Strange events in the night sky that spook their horses and cause power outages all through the valley inspire Otis and Emerald to set up cameras on their ranch to capture these phenomena, believing that they may be visitors from outer space.

Unlike his previous films, Nope goes for big-budget spectacle more than straight horror. But like those films, the story is there to prop up the film's deeper meanings, this time about the exploitation of the entertainment industry, our perverse need to relive horrific events through a camera, and the anonymous, often forgotten people that make movies possible. These themes don't really mesh well with the main story, however, making everything more than a little convoluted. The metaphors get in the way of the story and characters that in the end get dropped for a climax that is overlong and frankly, pretty silly. Peele is using his bigger budget to go after loftier goals and while that is admirable, this one may just be all too much.