"I'm Not Sure the Cloud is Gone" 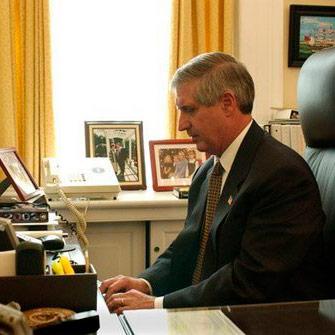 Andy Card has served in various roles for the last three Republican presidents: Ronald Reagan, George H.W. Bush, and George W. Bush. His tenure as the White House Chief of Staff in the administration of George W. Bush from 2000-2006 makes him one of the longest serving chiefs of staff in the history of the United States.

On Tuesday, November 14, Card will take the stage at the Jefferson Educational Society as part of this year's JES Global Summit IX. In preparation for his talk on political leadership, we spoke about his entrance into professional politics more than 40 years ago, his relationship with the Bush family, and his thoughts on managing up in the Oval Office.

Jim Wertz: I want to go back and talk a little bit about your time in the White House and some of your experience leading up to that, too, because as I look at your career, it seems as though you were almost methodical in the way in which you moved through the political spectrum.

Andy Card: I can honestly say it wasn't contrived.

JW: Okay, but your resume reads like a playbook. If someone were going to write a guide for an aspiring political administrator, your career might be a good model for them to follow.

AC: I don't disagree with that. First of all, I grew up in a family where "politics" was not a dirty word. My father's mother had a great influence on my political life, my public life, because she had been a suffragette. She fought for women to get the right to vote, and when women did get the right to vote, she was the first woman to register to vote in the hometown I grew up in. We were taught at a very young age to pay attention, to have views, to express them — not to be monolithic in our thinking — and the most important word in the constitution is "we", the very first word in the constitution… It was our government and we should participate in it.

I grew up not realizing that if you're an engineer, and I am, and a politician, that you're an oxymoron, so that was number one. I did pay attention. I couldn't wait to vote! I couldn't wait to volunteer on campaigns, which I did long before I could even vote, so it was a natural thing for me to do that. When I went to college and graduated, I moved back to my hometown and I ran for local office for the planning board. I got elected to a five year, no-pay term, and was part of local government.

JW: Let me time-warp for you from that first job in planning, to your time with George H.W. Bush.

AC: I first met him when I was running for the state legislature. He was chairman of the Republican National Committee. It was at the height of the ugliest period of time for the Republican Party because it was when Nixon was in trouble. I was invited to go to an event in Boston and I thought it was very cool because I got a ticket to go, but [that was] because almost nobody else was showing up. It was sparsely attended and it was really when Republicans were struggling because of Watergate. I was impressed that he gave a speech. It wasn't the most dynamic speech, but it was substantive and it was about the value of our institutions of government. It wasn't partisan. Among other things, he was talking about the significant role of the two-party system, and the process of electing candidates. It was a noble call.

AC: A little bit, I do. Although, the Watergate era really put a dark cloud over the Republican Party, maybe a little more than now; now, it's extremely divisive, but I'm not sure the cloud is gone.

JW: As you got to know President H.W. Bush better, and you were invited into his inner circle, I imagine that you began to establish a trust, not only with him, but eventually with his son as well. Did you get to know George W. during that time?

AC: I met George W. Bush in May of 1979. He was very different than he is today. He was not a very disciplined person when I met him —  in fact, the discipline that he had came from his mother. [laughs] You should not assume I am a close friend of George W. Bush. We were very close acquaintances during his dad's experience and I was surprised that he invited me to be so engaged with him. He asked me to run the convention in Philadelphia, he asked me to help work on the presidential debates after he won the presidency, and then I was completely shocked when he asked me to be his Chief of Staff. But I respected him and I think he came to respect me, but I'm much closer with his parents.

JW: It seems like that type of relationship breeds some measure of success, particularly in government, when it's not all based on a personal relationship and you can establish some trust on your record.

AC: That's how it was with both Bushes, in all honesty. It wasn't like I was a family friend, or anything like that. I do think that President Bush 41 probably did suggest to 43, before he became President, that Andy Card was somebody you should look at the be Chief of Staff.

JW: Do you think that the trust that you ultimately established between yourself and Bush 43 is necessary to be as successful? Do the Chief of Staff and President need to have that kind of relationship for productive administration?

"I told him when he asked me to be his Chief of Staff that if I'm going to be Chief of Staff, I cannot be your friend. I've got to be the staffer who's in charge of the staff, but I'm just a staffer."

AC: I'm not sure that you require an endorsement from a parent or anything like that, but there was a big advantage for me being roughly the same age as the President. He and I could speak extremely candidly and unvarnished, and I told him when he asked me to be his Chief of Staff that if I'm going to be Chief of Staff, I cannot be your friend. I've got to be the staffer who's in charge of the staff, but I'm just a staffer.

JW: Was that difficult for him? It seems like Bush 43 always made a point of trying to establish a camaraderie with people around him as a measure of doing business. Was it difficult to maintain a professional distance with him?

AC: No, I wanted him to have the courage to tell me I wasn't doing a good job without feeling bad or making me feel bad. Just tell me like it is, and if you're not happy with me, tell me you're not happy with me and I'll move on and do it differently. I think that candid relationship was very helpful and it was something that he embraced. We spoke very candidly.

JW: This current administration has already been through a number of Chiefs of Staff, and this seems to be a difficult White House to manage. Do you empathize at all with John Kelly, a man who has been described as being somebody who is in this more for the mission than for this administration?

AC: Yes, I have great empathy for General Kelly. I think that he's definitely well-suited for the responsibility and he's meeting it well, but it is a tough job. [The] Chief of Staff has to manage down, which is a challenge, but it's a particular challenge when you also have to manage up. I'm impressed with the new discipline in The White House, down, and I think that the discipline up from the Oval Office is still a work in progress.

I am still a big believer that if the president calls and says he needs help, everybody should find a way to say yes or to talk them out of asking you. I don't expect to be called, but I do feel strongly that the call to public service should be a noble call. I'm somewhat challenged because I think that lately, the noble call of public service has been tarnished. It starts with the president in the Oval Office. That's why I would like him to taste his words before he spits them out. A president has to lead, but in government, you have to lead by inviting others to be a part of the solution. You can't lead by dictate.