American citizens are not happy with their police. Following another grand jury decision, people took to the streets in NYC. There is more news from Ferguson. A local officer has been charged. That, and Conneaut Lake Park is finally going up for sale. Read about these stories, in case you missed it. 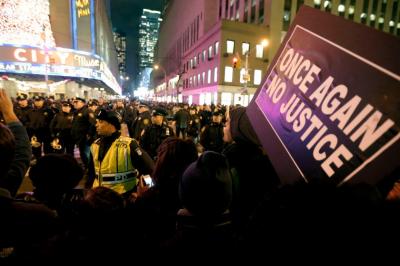 NationalAnother Cop Not IndictedA grand jury has decided not to charge NYPD officer Daniel Pantaleo in the death of Eric Garner. Garner, a 43 year-old black man, was suspected of illegally selling cigarettes when he was confronted by Pantaleo on July 17. After raising his hands and telling the officers not to touch him, Pantaleo placed Garner in a chokehold and wrestled him to the ground. Garner told the officers that he could not breath, but Pantaleo continued to choke him until Garner was dead. It should be noted that the NYPD has banned the use of chokeholds. Garner's death was later ruled a homicide, but no indictment came after the grand jury trial. Despite an announcement from US Attorney General Eric Holder that a federal civil rights investigation was being launched, protestors across the country took to the streets. On the heels of the protests, chants of "No justice, no peace, no racist police" could be heard throughout New York City.Full story at cnn.comMichael Brown's Stepfather ApologizesLouis Head, stepfather of Michael Brown, has apologized for shouting "Let's burn this bitch down" following the grand jury decision not to indict Darren Wilson. Head admits fault in his outburst, stating that the emotional upheaval he experienced was to blame. The St. Louis Police Department is investigating Head and his comments to see if he can be charged with inciting a riot, but a law enforcement official said that no charges are likely. This is in part due to the fact that it would be difficult to establish any hard evidence that his words actually caused any violent rioting.Read more at cnn.comDarren Wilson Receiving ProtectionFollowing several death threats, Darren Wilson is receiving protection from off-duty police officers. Since his involvement in the shooting death of Michael Brown in August, Wilson has been in a state of relative hiding, moving to different houses multiple times and avoiding public spaces. After his home address was leaked shortly after the shooting incident, Wilson has been moving from place to place. The Fraternal Order of Police has been sending volunteer, off-duty officers to protect Wilson. The Ferguson Police Department, however, has declined to offer Wilson any protection.Get the details at cnn.comLocalErie Police Officer Charged with DUIAfter hitting the back of a fire truck early Thanksgiving morning with a BAC over 0.16, Erie Police Officer Gabriel Carducci is being charged with a DUI. Carducci, who has only been on the force since Oct. 23, was off-duty and already on administrative leave at the time of the accident. In addition to the DUI, Carducci is also facing two summary traffic violations. The Erie Police Department has not yet commented on the investigation.Read more at yourerie.comConneaut Lake Park Going to SaleA ruling was issued today that placed Conneaut Lake Park up for grabs in a sheriff's sale. Despite attempts to stall the sale from the State Attorney General's office, Crawford County President Judge Anthony Vardaro has decided to place the property up for sale this Friday at 10 a.m. The money from the sale would be used to pay over $900,000 in back taxes.Full story at yourerie.com