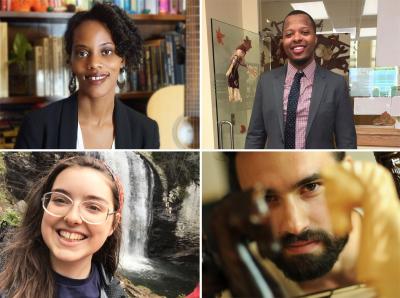 Erie Reader's "40 under 40" edition provides ample evidence that Erie can retain our best and brightest and attract new lights, too.

But as we emerge from a global pandemic, we can also celebrate young leaders who have Erie roots but have made their marks elsewhere. It's not brain drain when the world gains.

Today, we introduce you to four former Erie residents under 40 who have expanded their horizons far from our hometown.

For Faith Toran, 30, home is any place where there's human suffering. After graduating from Central High School, where she was class president, participated in the Academic Sports League, and played sports, she moved to Atlanta to major in political science at Spelman College, a historically black all-women's college.

In a 2014 op-ed column for the Erie Times-News, Faith reflected on her decision to leave Erie. "I boarded a plane in 2009 with two destinations: Atlanta and destiny. I had a little money saved and a heart full of ambition, fear, and courage. As the second oldest of 11 children, born three months prematurely, I knew a little about overcoming obstacles."

At Spelman, she embraced the school's mantra: "It's my choice and I choose to change the world." So it was fitting that after graduation in 2013, she joined the Peace Corps. She was assigned to Burkina Faso, in West Africa, responsible for teaching 120 children ages three to seven.

After 27 months in Burkina Faso, a former French colony, she wanted to perfect her French skills and decided to pursue her Master of Arts in Global Communications at the American University of Paris. She fell in love with Paris and its multicultural vibe. "My friend group is like this small U.N.," she said.

During grad school, she took a six-month break to conduct an impact study in rural India, in the Tamil region, on how to reduce waste. Back in France, she worked on an organic farm in Normandy and a horse farm in the Jura region.

Returning from work one day in 2019, a wave of emotion swept over her. "I'm OK with discomfort," she said, so she decided to capture her memories and emotions. "I sat on the edge of the bed and just began to type. It wasn't a conscious effort but in two hours, I had charted my life from age three to 28 in poems." She wrote about our political system and racism, among other topics.

She wrote for herself, not an audience, as another move was in store, this time to Upper Guinea, to work on a Communications for Development (C4D) project for the U.N. on climate adaptation and resilience.

COVID-19 cut that project short, and Toran was evacuated to the U.S. from Conakry, Guinea's capital.

Back in the U.S., she wanted to make the most of her downtime. "Maybe you can revisit your book," a friend suggested. "What book?" Faith responded. Then she remembered the poems that had poured out of her soul in 2019. Faith realized that "maybe someone needs to be encouraged that it is possible to recharge your life. You can create narratives in a way to archive the past."

Her book of poetry and prose, Freedom at Day Zero, is available on Amazon, where one reviewer wrote: "(I) read this piece in one sitting, following the author on her journey of trauma, self-discovery, and coming of age as a young Black woman in Erie, Pa. … The vulnerability and voice in these poems brought me to tears at times and made me reflect on my own traumas and childhood."

I marveled at Faith's writing when she was on the staff of Fresh Ink, the teen journalism program I led at the Erie Times-News. But I didn't know she had become a published author until I asked Deandre Williams, another former Fresh Ink writer, about his current reading list during an interview for this story.

Along with All Boys Are Not Blue, A Memoir-Manifesto, by George M. Johnson, and Why Are All the Black Kids Sitting Together in the Cafeteria?, by Beverly Daniel Tatum, Deandre said he was reading Faith's new book. With that information, he reconnected me to Faith, who is currently working in communications for Médecin sans Frontières ("Doctors without Borders") in Haiti.

Like Faith, Deandre, 30, has landed miles from Erie many times. He is currently the human resources manager for Impact Public Schools in Seattle.

In 2023, he will receive his doctorate from Drexel University — quite a feat for someone booted out of public school in Erie after his "fifth strike" for not wearing a uniform shirt. No one bothered to find out or ask Deandre, an honors student, about the family circumstances that led to him not having a uniform shirt.

"People like me, African-Americans, are overlooked for our abilities," he said. "People are coming in with assumptions that this person is not going to make it."

He faced other stereotypes. "You're tall. Play basketball," he was told. "If I had listened to someone else, that would have been someone else's dream."

He signed himself back into an alternative high school program in Erie, then enrolled at Indiana University of Pennsylvania for a year before transferring to Morehouse College, Martin Luther King Jr.'s alma mater, in Atlanta, to major in sociology. At Morehouse, he was among "a lot of brilliant individuals who looked like me, who inspired me. We held each other accountable."

Following graduation, he worked for various charter schools, including Freedom Public Charter Schools in Washington, D.C., and as an Education Pioneer Graduate School Fellow at ReGeneration Schools in Chicago. He received his master's degree from Trinity Washington University and worked as relationship manager for UNCF (United Negro College Fund).

He made the leap from the District of Columbia to the state of Washington when he saw an opening for a six-month consulting position at Impact Public Schools in the Puget Sound area. Impact then offered him a full-time human resources position to help start a new school — in the midst of COVID-19. Working in HR, he had to develop health protocols and also work on Impact's plans to open two new schools, in addition to the two that Impact currently operates.

"As with any business, you start out small," he said. "Now we're growing so rapidly we started an HR department."

His advice to Erie youth?

"Always be true to yourself and understand the world around you," he said. "There are many ways to achieve greatness. Don't limit yourself to one way."

Like Deandre, Erie native Madeleine Nawrocki, 23, has found a home in the Seattle area, at least for the short term.

At the University of Pittsburgh, Madeleine earned a bachelor's degree in environmental science, a certificate in American Sign Language, and a minor in public and professional writing. She is currently working for EarthCorps, an environmental restoration program that is part of AmeriCorps, which also has included international participants pre-COVID.

Working on a team, she has removed invasive species, built rain gardens, and restored trails. Her stint began in February and continues through December.

After graduating from Villa Maria Academy, Madeleine first majored in occupational therapy at Pitt, but a year and a half into college, "I realized I had much more of a passion for ecology." Her love of the outdoors was nurtured, in part, by working at Camp Notre Dame as a teen and reading Silent Spring by Rachel Carson, "the patron saint of the environmental movement."

In her new home, Madeleine is learning about the "multifaceted" environmental challenges facing the Pacific Northwest, including the ecology of wildfires and changing salmon migration patterns. Environmental problems can seem overwhelming, and it might be easy to decide, "It's bad, I can't do anything, then throw up your hands," she said. But that's not an option, admitted Madeleine, who recently watched the film There is No Planet B.

"There is still an environment to save," she said, and new paths to carve. For Madeleine, that will mean developing interpretive hikes for those who are hearing-impaired, as it becomes safe to gather in groups again.

Like the others in this story, Luka Glinsky, 30, made productive use of the time afforded by the COVID-19 stay-at-home orders.

When he left Erie, where he was home-schooled, for Carnegie-Mellon University, he had a goal of "affecting large-scale change" someday. He became "a bit more humble" after he graduated and moved to New York City to pursue his acting and writing career but found himself working "the usual side gigs to put food on the table."

But he also learned that his skills as a champion chess player came in handy, as he taught chess to youngsters in a variety of settings, including to toddlers at a "very niche company." Only in New York, he laughed, would there be such a market. Better to wait until a child is seven or eight to introduce them to the game, he now knows.

In 2020, he pivoted back to his writing — composing poetry, as he has done since high school, and working on short stories, essays, non-fiction pieces, and short plays.

He's also crowd-funding a five-part mini-series, about the lives of millennials in Brooklyn. The first episode, filmed in a continuous take at Prospect Park, is in post-production; it will be entered into film festivals.

The pandemic hammered the arts temporarily, but Luka said they will bounce back. "It may seem like they're dormant, but we're waiting to be able to tell our stories."

Even when those stories are set far from here, they will have an Erie element. "I live in a bubble here," said Luka, adding that he often talks with his parents, Albert Glinsky and Linda Kobeler, about the opportunities he had in Erie, a "pluralistic community," to meet people with differing viewpoints.

Changing the world will depend, in large part, he said, "on us breaking through some of those barriers" to learn "what makes others tick."

Thanks to intrepid ex-Erieites, that's what's happening, coast to coast and to the Caribbean.

Liz Allen has known Faith Toran, Deandre Williams and Luka Glinsky since they were teens, writing for Fresh Ink, the Erie Times-News youth journalism program, and knows Madeleine from St. Andrew's Catholic Church. You can reach Liz at lizallenerie@gmail.com.