The Film Society of Northwestern Pennsylvania brings great cinema to the region, as FILM at the Erie Art Museum kicks off its fall season Wednesday, Sept. 19. 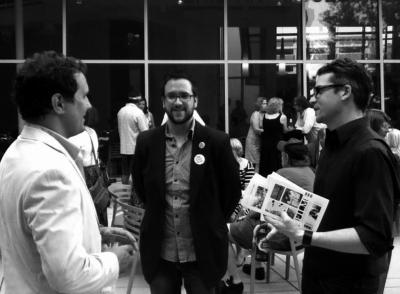 For most of us, it likely first began before we could even truly appreciate it. Maybe it first began when our parents first slid in a DVD – or VHS – and we laid down on our stomachs, elbows pressed into the floor, our head resting eagerly on our closed fists as we stared at the screen waiting. Or maybe it began when our parents led us through the dark aisles clutching a tub of popcorn, a box of Lemonheads, and a tall, plastic cup of our favorite soda to those reclined seats with the screen as big as what seemed to be a football field illuminated in front of us.

For most of us, our love of film likely began before we could understand the complex nature of plot, good acting, and thematic suspense whilst appreciating the craft of artistic filmmaking more than the blockbuster, Michael-Bay-moneymaking side of the business. Like many of us, the love and appreciation of film for John C. Lyons, Erika Dauber, and Christine Olivier, three people working to further the art and appreciation of film in Erie, began in those childhood moments when a particular film captivated each of them. Those formative moments, the planting of the seeds, have now blossomed and are branching out as the future of film in Erie.

John and Erika, Erie-area natives, are a dynamic duo behind the growing success of the Film Society of Northwestern Pennsylvania. As executive director, John, an award-winning filmmaker and dreamer bursting with ideas and vision, brings his love, knowledge, and appreciation for filmmaking. Erika, the society's president, who first connected with John in 2002 when he asked her to be in a film he was making, lends her experience in the non-profit sector and her savvy organizational skills.
"You can kind of call [the Film Society] an umbrella – a group that will unify film in Erie," Erika says. "You have Mercyhurst, you have the Eerie Horror Film Festival, you have Spirit Quest Film Festival, Edinboro Film Series, other film things popping up around Erie – what we want to do is be that unifying organization that everyone wants to be part of, and that we hold a standard for what is well-run, what is thoughtfully chosen in terms of programming, what is the cultural benefit to all of this."

Which brings Christine into the fold. Assistant to the director of the Mercyhurst Institute for Arts and Culture, Christine, a bright new brain-gain to the Gem City, is tasked with directing the Maria J. Langer Film Series.

"Jamie [Grady, director of MIAC] and I came into our positions new to Erie," explains, Christine, who had worked previously in theater. "We wanted to reach out to local organizations, and we found John and Erika."

After an initial business meeting that turned into a three-hour think tank that resulted in plans for Christine to join John and Erika on their trip to the Toronto Independent Film Festival, Christine began working with the Film Society to develop and plan the Erie Silent Film Competition.

"It's a really exciting partnership," Christine says. "We're not shying away from using their knowledge and helping them use our resources of being on a college campus."

In addition to FILM at the Erie Art Museum, which John curates, and working with the Langer Film Series, the Film Society also works with the Edinboro Film Series, which John founded, as well as the Eerie Horror Film Festival – all of which results in the Film Society serving as the tree branching out for film in Erie to bring all of those endeavoring for the art together.

"We want to be the people who take the bar on film production and appreciation and raising it up," Erika says. "Right now, what's that next step of bringing all of these people together? It's letting them know all of the events that are going on and working together."

"We can keep operating and working individually working our asses off," John adds. "Or we can look at the bigger picture and think of how we can make this city we live in awesome and do everything we want to do by working together and utilizing each others' talents."

As the fall season of FILM at the Erie Art Museum begins, film appreciators and enthusiasts can now see independent films on average three nights a week with FILM screening Wednesdays, the Edinboro Film Series presenting Thursdays, and the Langer Film Series running Fridays – a welcomed alternative to the mainstream blockbusters offered at Tinseltown and regurgitated at the dollar theater.

"We're working to build the solid base and branch out from that," John says of his future plans for the art of film and filmmaking in Erie. "We have big, big dreams," he adds smiling.

For full schedules and details for FILM at the Erie Art Museum, the Edinboro Film Series, the Langer Film Series, and the Eerie Horror Film Festival as well as details on the Erie Silent Film Competition, check ErieReader.com.