John Lindvay fills you in on a side of game development you may not realize exists. 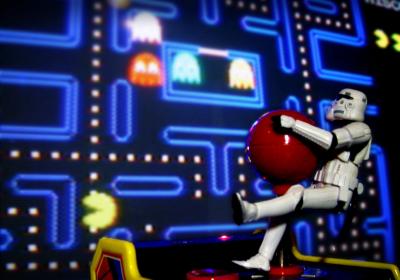 There is a whole side of video games of which many are totally unaware. It is leaner, meaner, and more daring. It takes all the risks, pushes boundaries, and challenges traditions. This progressive side of video gaming falls onto the shoulders of independent video games. And just like independent board games, movies, and music, indie games explore the boundaries of their medium.

This past year we have seen the elevation of games to a serious platform for interactivity and storytelling, and indie games are leading this charge. "I think video games hold so much potential for creative expression, but it's a very young medium, and people are still trying to figure out the best ways to do it," writes Terence Lee in an email interview. Terence is one-fourth of Hitbox Team, an indie game developer that released its first title, "Dustforce," last year.

"Dustforce" focuses on player mastery, as players engage in the timeless conflict as acrobatic janitors versus – you guessed it – dust.  "Dustforce" enters into the pantheon of excellent platformers—think of the original "Mario," amped up on Red Bull – or if you are a bit more hip: "Super Meat Boy." The only thing that prohibits players from attaining the coveted "S" Rank – or in laymen's: a perfect run – is their own mastery of controls. The most incredible part to some is that a game with this much polish was created by four friends at the age of 23.

Everyone has heard of gigantic industry titles, like "Halo," "Call of Duty," and "Grand Theft Auto." Those games are made by massive development teams and follow the boom-or-bust model of Hollywood – their games need to be blockbuster successes in order for the studios to continue existing. This creates a problem. "[The] majority of games have been so heavily commercialized at such an early stage in their development, so designers are often forced to think about design in terms of profitability," Terence describes. "They focus on mass appeal, addicting design, and shallow themes."

While this choice to focus on mass appeal isn't inherently bad, it forces larger developers to take fewer risks and innovate at a slower rate.

Indie games, like "Dustforce," are currently thriving because they help resolve the stagnation of the gaming market. "Since indie game developers are, in general, willing to take more risks than AAA developers, we'll likely see most of the exploration with them," Terence explains.  So while AAA developers – the biggest, most funded design houses – fall short of innovation, indie games toy with concepts and mechanics that don't necessarily appeal to everyone but offer an experience that is craved by some.

Maarten Brouwer shares some of Terence's ideas. "I think it's also about game ecology," writes the indie developer who partnered with Daniel Ernst to form indie developer Serious Brew in an email interview. "Earlier there were a lot of middle-sized game companies that dared to experiment and offer new experiences. But now they're mostly either gone or eaten by the big conservative ones, leaving a niche that indies have filled."

The duo released their first title, "Cargo Commander," last year, a game about a lonely blue-collar worker whose job is to collect cargo from abandoned shipping containers in the darkness of outer space. As players work through the game, they can see the developer's thumbprint. Maarten and Daniel take the core concept – a blue-collar man's day job in outer space – and experiment to find out how far it can go. It feels like the 'real science' behind game mechanic development.

Maarten agrees and says he views indie games, "as little laboratories that brew strange potions, mixtures of tastes that you wouldn't expect together and forgotten flavors that trigger lost memories or elicit surprisingly deep emotions." He goes on to clarify that, "Of course, quite some indie games are made for other reasons, and AAA games sometimes create really new experiences that indies never could with their budget, but this feeling of being on the experimental edge is what I love of indie development."

Indie games are becoming more popular because of their accessibility. "It's also easier to sell a game, since you got more places to sell your game," Daniel explains. "You got Android, IOS, Steam, and many other portals to sell your game on. And it does not really matter if you are an experienced game designer or a hobbyist for some of those portals. If you have an interesting idea or a well-marketed idea, you can sell your game."

This is not only great for the developers, but for us gamers. We have this huge selection of games to browse through and find custom experiences that were never before available.

And finally the most impressive thing about indie games: they can be developed anywhere in the world. Serious Brew is located in the Netherlands and Hitbox Team is in Australia. There could be a small group of friends in some apartment, basement, or office here in Erie, Pa. that is helping to create the new world of gaming.