Woodward discuses the question, "have we forgotten the lessons of Watergate?" 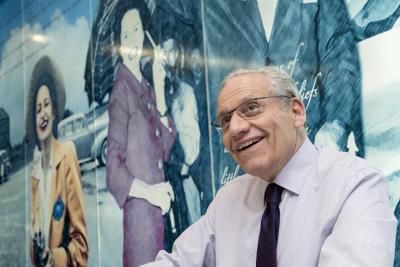 Bob Woodward has had a storied career — one many journalists envy and even more study in hopes of being even half as good or prolific. Since joining the Washington Post in 1971, Woodward has gone on to author 19 books, 13 of which have been bestsellers.

Woodward became a household name in the early '70s thanks to his intrepid work with fellow WaPo investigative journalist Carl Bernstein. The two provided groundbreaking coverage of the Nixon Administration's Watergate scandal. With the support and encouragement of legendary editor Ben Bradlee, Woodward and Bernstein were the first to report on the Nixon Administration's now-infamous "dirty tricks" during President Nixon's re-election bid.

All the President's Men, the No. 1 bestselling book they co-authored based on their reporting, went from the pages to the silver screen in 1976 with Robert Redford as Woodward and Dustin Hoffman as Bernstein, catapulting Woodward and Bernstein from fearless reporters to celebrities, inspiring a new generation of investigative reporters.

Woodward is off the heels of his latest book, 2018's bestselling Fear: Trump in the White House, which continues his stream of presidential coverage, previously of Nixon, Bill Clinton, George W. Bush, and Barack Obama. With 1.1 million copies sold in the first week alone, it became the fastest-selling opening ever for publisher Simon & Schuster.

Based on hundreds of hours of interviews with Trump administration officials, Fear chronicles then-candidate Trump's 2016 campaign and goes on to explore the early days of the Trump presidency, as aides attempt to work through unprecedented circumstances and uncharted waters with a president unlike any before him. Drawing the title from an earlier unrelated interview for the book, Woodward recounted that quote from Trump: "Real power is, I don't even want to use the word, fear."

Woodward will appear at the Reg Lenna Center for the Arts in Jamestown, New York to address the titular question of his discussion: "Have We Forgotten the Lessons of Watergate?" thanks to the Robert H. Jackson Center in Jamestown.

"This program is a great example of how the Jackson Center is facilitating conversations whose roots lie in Justice Jackson's legacy," said Kristan McMahon, President of the Robert H. Jackson Center, in announcing the event. The Jackson Center aims to "advance public awareness and appreciation of the principles of justice and the rule of law as embodied in the achievements and legacy of Robert H. Jackson, U.S. Supreme Court Justice and Chief U.S. Prosecutor at Nuremberg," according to the organization's mission statement.

To find out whether we've forgotten those Watergate lessons or not, head to Jamestown to learn from a living legend, who's still inspiring journalists today. — Ben Speggen