Is The Holy Mountain the strangest movie ever made?

Do you enjoy weird movies? 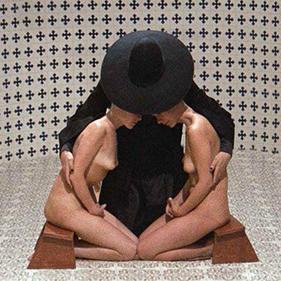 Do you enjoy weird movies? Well, if you do, Alejandro Jodorowsky's 1973 epic The Holy Mountain makes Donnie Darko look like Jerry Maguire.

Want to see a loin-clothed Jesus lookalike wake up from a nap surrounded by hundreds of mannequins designed in his image? How about a reenactment of the Spanish siege of Mexico, featuring a cast composed entirely of costumed frogs and lizards? The film also makes a pit stop on the planet Mars, where "the young generation makes arms for its marches and sit-ins," including "psychedelic shotguns, grenade necklaces, rock-and-roll weapons" and so on. I've just described about ten minutes of screen time, by the way. It goes on and on like this.

Jodorowsky rose to the occasion by combining just about every ingredient in the hippie cookbook – acid meltdowns, new age mysticism, free jazz, science fiction, tarot, yoga, and a heavy dose of inexplicable nudity.

Let's back up a bit. The Holy Mountain is Jodorowsky's follow-up to El Topo, a "psychedelic western" that, along with cult hits like Night of the Living Dead and Pink Flamingos, helped mobilize the "Midnight Movie" craze of the 70s and 80s. El Topo – which is pretty damn weird in its own right – impressed John Lennon and George Harrison so much that they convinced their manager Allen Klein to produce the director's next feature. Jodorowsky rose to the occasion by combining just about every ingredient in the hippie cookbook – acid meltdowns, new age mysticism, free jazz, science fiction, tarot, yoga, and a heavy dose of inexplicable nudity.

So is The Holy Mountain a visionary epic or a dated curiosity? For my money, it's more of the former than the latter. There's something genuinely wild about Jodorowsky's ferocious ambitions, even as he wallows in pseudo-profundity. If you're a Twin Peaks fanatic, a Wiccan goddess, a hipster cinephile, or just an all-around stoner, this is one you won't want to miss. — Dan Schank