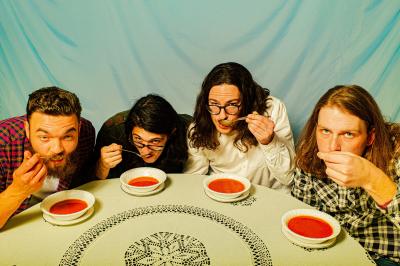 NOTE: THIS EVENT HAS BEEN CANCELED

Where there's a will, there's a way, and Connecticut indie rockers A Will Away are on their way to Lola's Lounge right here in Erie, alongside Sunsleeper, Elbow Room, and Dive.

A Will Away is just a few short months into the release of its latest album, Soup, and by the time it comes to Erie, will have just finished traveling with Atlanta's Microwave for the North American leg of their world tour. Soup marks the band's sixth release since 2013, and like many bands in their genre, with time it's mellowed out its sound from the energetic pop-punk tastes of its earlier material. But this is not a knock on them. Much like actual soup, the album leaves the listener with a comforting feeling — reminiscent of the sound of late '90s alternative rock, with chilled out vibes and catchy hooks.

From Salt Lake City, Utah comes Sunsleeper. The quintet began its emo rock journey in 2015, and has two releases under its belt, the latest being 2019's You Can Miss Something & Not Want It Back. Like A Will Away, Sunsleeper's latest album also seems to channel late '90s indie rock, as well as take notes from the best of its contemporaries in its genre.

Opening acts include Cleveland pop-punk/emo trio Elbow Room, who is making its second trip to Erie of the year, Pittsburgh alt-rockers Dive, and bassist Lyle Sallade of The Standby performing as a solo act. — Tommy Shannon