It's the Last 8 Great Tuesday of the Year: What Are You Waiting For? 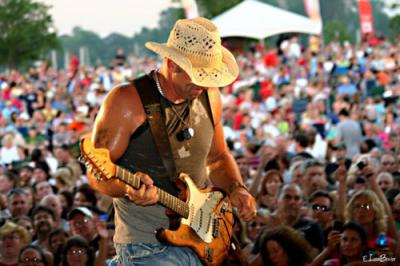 August 26 is your last chance to get a summer groove on (at least) one more time when legendary local band Jake's Blues close out the 2014 8 Great Tuesday season along with Rick Magee and the Roadhouse Rockers, and Six Years After.

"It's a big party, and I love it," says Jake Banta, who's brought his blend of blues and rock to every one of the past 14 Eight Great seasons. "Over the years, fans have become friends, so this concert is filled with a lot of fun and energy."

Banta says he also loves the beautiful setting and the sound of the amphitheater, and he's stoked about sharing the stage with his childhood friend, Rick Magee, who fronts the Roadhouse Rockers, that bills itself as "America's Favorite Biker Band."

Newest to the stage is Six Years After, just getting its feet wet on the local scene. To get the evening started, they'll offer up a mix of metal covers and original tunes.

What can we expect? Banta says that Jake's Blues plans to exceed anything they've ever done in the past 14 years. And, oh – he hinted that there may be a little jam at the end.

So last chance, folks – grab those lawn chairs and get your summer on while it's still (sorta) hot. – Mary Birdsong