"JC Nickles continues on his creative travels by providing thoughtful, provocative content, but with a twist." 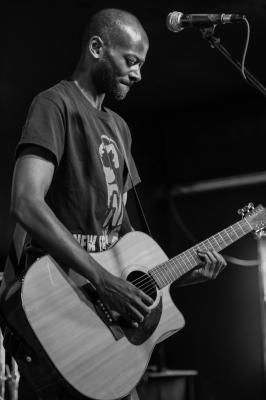 Alternative singer-songwriter JC Nickles has been performing and curating events in the Erie underground circuit for a while, consistently sharing the limelight with his musical colleagues of different genres. Nickles is pushed to the forefront this time around for a night that will honor the multi-faceted vocalist in an event dubbed "November Reign."

On November 16th, the Performing Arts Collective Alliance (PACA) will proudly allow the NEAR (New Era Artists Revolution) founder to celebrate his long-awaited album 2020 Vision: Pros & Cons, a project that is part one of a thematic trilogy. JC Nickles continues on his creative travels by providing thoughtful, provocative content, but with a twist.

"This is the first album I made that's more beat-oriented than my usual material," he confirms. "This upcoming album only exists because I was searching through old files looking to change up the live setlist." In doing so, the Sudden Frost frontman came across early recordings dating back to 2006 that were aided by multiple producers who encouraged him to write to their production.

Now that the plastic is sealed for a packaged CD, fans will be able to get a dose of Nickles' message. The album's lyrical themes reflect this, starting with the "cons" of working through personal and societal issues, before moving onto the more optimistic, empowered "pros" of overcoming them. Although the follow-up LP is already written with some songs ready to go, Nickles is focused on promoting the inaugural chapter of 2020, the first release under his name.

As always, the frequent collaborator has asked a few friends to be on the bill of his release party to give audiences a night of variety. Acoustic songwriter Heather Devore, upcoming hip hop artist Lil Eggo, and New York's Virus X will all be accompanying JC to spice things up. Promotion agency Gimp Guy Underground also has a hand in the mix to give you one great evening of music, bringing in musical acts such as GESH (Genetically Enhanced Super Humans) and Maroon River. Performing a couple of tracks from his latest project and having his drummer Bochi join him on the acoustic part of his set, JC is ready to show his fans what "November Reign" is all about. — Charles Brown