Jefferson — The Next 10 Years 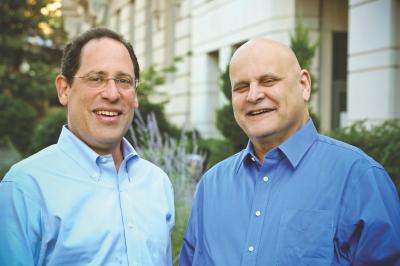 Contributed Photo
Authors and lecturers Bruce Katz (left) and Jeremy Nowak (right) are experts in urban development and will share their observations about Erie as the Jefferson Educational Society celebrates its first 10 years at the Bayfront Convention Center.

The Jefferson Educational Society has from the beginning been a work in progress. JES President Dr. Ferki Ferati is eager to disabuse folks of the notion that the organization, which he's been involved with from the get-go in 2008, is merely a "history-based type of institution." Of course, engaging with our past is important and yields valuable lessons, but it should be viewed as part of an educational continuum that informs the present, and in turn, the future. He echoes the organizational motto: "We are Erie's think tank for community progress."

In its first 10 years of existence, the Jefferson has hosted 1,000 programs, established the Civic Leadership Academy (with nearly 80 graduates so far), and opened a publication division (books, essays, and journalistic studies) to build a corpus of knowledge and resources for Erie to draw from as it plots a course forward. Along the way, they've also partnered with power players in the community such as Erie Insurance and LECOM with influence and cachet to affect change. That's without mentioning Perry 200 in 2013, which raised $2 million and was the most comprehensive commemoration of the War of 1812 in the country. In short, they've done some things thus far.

In the spirit of continuing on that trajectory, they will look ahead to the next decade with a gala event at the Bayfront Convention Center. Jefferson — The Next 10 Years will feature a presentation from the JES, a lecture from urban experts Bruce Katz and Jeremy Nowak, authors of The New Localism, a surf-and-turf dinner (vegetarian options available), an open bar (before and after the presentations), and music from Steppin' Pappy (purveyors of honky-tonk, rock, blues, and soul). Ferati is excited to hear from Katz and Nowak because "what they've written reinforces the role Jefferson wants to play in this community — to present ideas for improvement."

In regards to their own self-improvement, the Jefferson is planning to make at least 50 percent of future programming free and open to the public, as well as establishing satellite chapters around the region (including Corry, North East, Fairview, and downtown) to improve outreach and accessibility. After all, it takes an audience to mobilize progress. In addition, Jefferson will launch the Scholars-in-Residence program, wherein senior experts in various fields will be called upon to author essays and offer advice on how to make Erie a better place to be. Of course, the Global Summit series will carry on into its 10th iteration, with many of the key speakers already locked in for appearances.

While we could all do better in some aspect of our lives, you could do worse than attend what's shaping up to be an enlightening evening. — Matt Swanseger

Jefferson: The Next 10 Years