Journey Out Into the Woods with the Erie Playhouse

Show exemplifies what a post-pandemic production should be 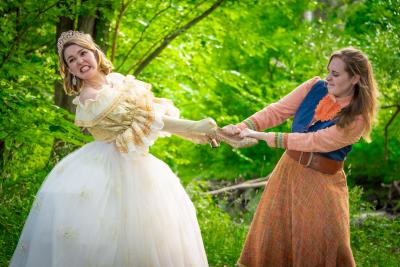 I'm not going to waste anyone's time by mincing words, Into the Woods presented by the Erie Playhouse is the way theatre SHOULD be post-pandemic. It has the type of diverse and dynamic casting that all theatre SHOULD have going forward. The most important thing is that you SHOULD see this while you have the chance.

While the world is eagerly waiting to return to "normal," there is a need to take stock of everything that worked, what honestly didn't, and what just plain needs to evolve. Some theatre just doesn't ever need to come back. Pedantic, self-serving, monochromatic productions, that do nothing but get a cheap laugh, or accomplish nothing but stroking egos need to become a thing of the past. It's time to tell stories again, whether it be with truly classic works or new ones. Into the Woods, both entertains and has plenty of honest moments that the audience can take with them for life.

Wayside Presbyterian Church is a fine choice of venue. It's out of the way enough to feel immersed but still has all the needed creature comforts. Two things to know: one, bring your own chair or blanket; also the show is two acts. The first act can feel like a conclusion (in some youth productions it actually is), but make sure to stick around for the roller coaster second act.

The basic premise will feel familiar, the fairy tales you grew up with all exist in the same world and interact with each other including but not limited to characters from Jack and the Beanstalk, Cinderella, and Little Red Riding Hood. The central actions focus on a young baker and his wife as they try and undo a curse of being unable to have children done by a witch, and caused by the baker's father. As long as you can keep up with that, you'll be just fine. Suffice to say as all the characters try for their happily-ever-afters, they discover there is a big difference between what one wants and what one truly needs.

Director Domenic Del Greco and the rest of the creative staff have built a production that while keeping all elements of the traditional productions has a flair its own. Well-timed comedic moments, based clearly on organic work and a cast that's willing to play and have fun, as well as work hard. The set is multileveled with a number of hiding spots that allow actors to pop in and out at various moments. Patrick Rose and the entire orchestra deftly handle a very difficult score, and especially shined with numbers "Your Fault" and "Last Midnight."

There is just so much to say about the cast. This is an excellent ensemble cast that really plays off each other well. Although every member of the cast deserves credit for the work that was put in, the newcomers shine, and the collective execution benefits as a result. Ben Snyder as the baker really does bind the entire production together. It's difficult to play subtle roles amidst flashier counterparts, but Ben carries it out beautifully. I appreciate the choice of two narrators — the idealistic Myles Bruce in the first act and the more world-weary Steve Wendell in the second. Brent Hetrick does some really nice work as Jack, being honest and sincere on stage is not as easy as one would think; he tackles "Giants in the Sky" with gusto.

Genevieve Ellis as Cinderella is one of the more dynamic characters in the show. Her journey is definitely one of getting what you need rather than what you want. While her work in the first act is very good, she's absolutely radiant in the second act. Her work during "No One is Alone" is sure to have a few eyes watering each night. Leah Mathie as the baker's wife is certainly no appendage, despite the character's name. She brings wisdom, charm, and kindness to every moment on the stage. Falling in love with her character is so easy, but Mathie is clearly the guiding talent that makes it happen.

Alex Staley really has such a natural charm as Rapunzel's Prince. I really hope he keeps at this and continues to work hard and grow as an actor — if he does, I think we will see him often on Erie stages and beyond. It's so nice to have Patrick Vahey involved; he adds so much to every scene he's in. He innately understands the balance needed to play Cinderella's prince — brash and overbearing but with the affable magnetism that makes his popularity believable. Even amidst so many highlights, "Agony" stands out because of the on-stage chemistry between him and Staley.

Zayna Darres gives us perfect spunk as Red Riding Hood, but never loses the innocence needed for the role. Then there is the role of the witch, made famous by Bernadette Peters on Broadway and Meryl Streep on film. Most actors always say they'd kill for this type of role, but heavy is the head that wears the crown. Esther Demary more than handles such a vaunted legacy, never shying away from the demanding vocals. It doesn't come till near the end of the show, but her rendition of "Last Midnight" is well worth the wait.

With all of the praise I've laid upon the production, you might think it's perfect. It's not — no production ever is. But that's not the point — the point is the Playhouse has capably tackled a classic during a very difficult time and has demonstrated the confidence to take risks. Theatre returning from the pandemic needs to be honest and simple but still powerful. Into the Woods is more than able to accomplish this. Even with so many successful shows under the Playhouse's belt, there will be a unique notch signifying this show.

You have one single weekend remaining to see it, so don't miss it. Like mist in a wood, it's something that only comes during perfect conditions, and vanishes all too quickly.