The annual Greek Fest takes over Erie for the 29th year.

by Tracy Geibel
View ProfileFacebookTwitterRSS Feed
July 5, 2017 at 9:30 AM 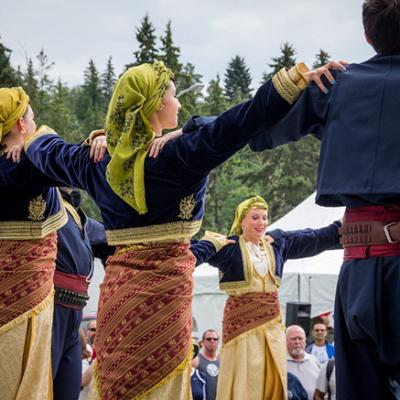 Not everyone can go to Greece, but they can experience the country's food, music and culture in Erie.

Assumption Greek Orthodox Church's Panegyri (or "Greek Fest"), now in its 29th year, typically brings in tens of thousands of guests from all over the United States, according to Fay Mintsizeris, who will be running the raffles at this year's event.

Mintsizeris, who has been volunteering since the first Panegyri, knows of one California family that schedules their vacation in conjunction with the festival. But every year, she meets someone who's never attended before.

"Every year, we learn something new," Mintsizeris said.

For the first time this year, the Panegyri will operate a small grocery area in the church hall. It will include Greek food favorites like Greek bread.

The festival will also have its usual live music, Hellenic dancers, church tours, several vendors and plenty of food. Guests can purchase lamb, chicken or fish dinners. And they'll have an opportunity to try Greek wine, beer, coffee and even calamari. The Odyssey Dancers are set to perform Saturday and Sunday, but children from the church will show off their dance moves, too. They've been practicing.

Fireworks will be set off at dusk on Saturday, and raffles will take place throughout the weekend. Among the prizes this year is a trip for two to Greece and a homemade Greek dinner.

Parking and admission are free, and funds raised by the festivities benefit the church and its endowment fund. — Tracy Geibel