Orwell was right. War is peace. And vice versa. 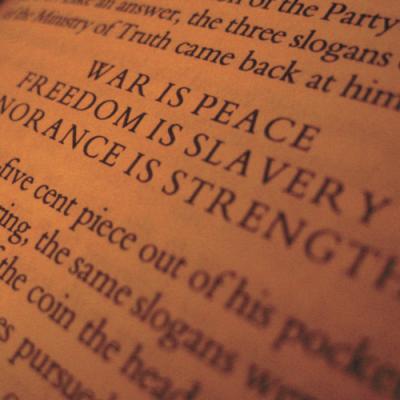 I've driven, biked, and walked that road, but I've never figured out what that sign is trying to tell me. Is it suggesting, in the event an aircraft flies a little too low, that I duck?

Color-coded Homeland Security ratings at airports after the Sept. 11 attacks were similarly baffling. Intermittently, a recorded loudspeaker voice would, with just enough cautionary authority (what were those auditions like?), announce that an "orange alert," for instance, had been issued. Color charts explained just how terrified we should be.

But the most these warnings could ever do was worry us. Generate fear. Breed suspicion. Plant the seed of wariness that grew into defensiveness against our fellow humans.

If there was an orange alert, weren't we more likely to look dubiously at other passengers who fit the racial profile of the accused du jour?

Isn't this exactly where we are right now?

Even Erie's own Tom Ridge, former Homeland Security Secretary, questioned the ratings' viability. As CNN.com reported, "in 2009, Ridge wrote in a tell-all book that sometimes officials such as Ashcroft and Rumsfeld pressured the department to change the level, describing a 2004 event in which his arguments against raising the alert worked."

CNN.com referenced a passage from Ridge's book: "I consider the episode to be not only a dramatic moment in Washington's recent history, but another illustration of the intersection of politics, fear, credibility, and security ... After that episode, I knew I had to follow through with my plans to leave the federal government."

Ridge resigned, and the color-coded threat system was retired in 2011. But the political practice of fearmongering keeps getting promoted.

Our bodies react to fear via our sympathetic nervous system, creating a "fight or flight" response that ramps up adrenaline and puts us in a reactionary, anxious state.

Conversely, our parasympathetic nervous system – halted during times of panic – is responsible for the "rest and digest" response. It lets us integrate sensory input with earned wisdom. Take a breath. Gain perspective. Then calmly determine how to rationally respond.

After President Bush's post-9/11 statement that America was in a state of war (despite life as usual for most of us), Slavoj Žižek wrote that we entered "a time in which a state of peace itself can at the same time be a state of emergency."

History tells us that peace will not be created by leaders who use fear to manipulate power. We owe it to ourselves to take a deep breath and create our own. Our freedom depends on it.