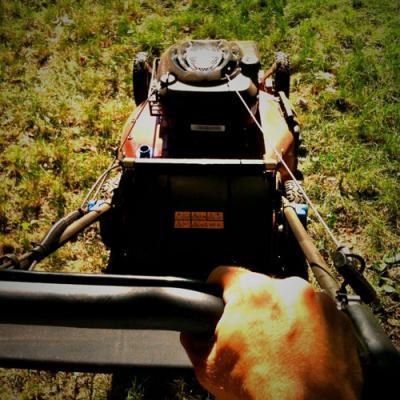 On any given summer weekday, our streets are narrowed not by road crews (though that'd be nice) but by mowing crews, their long trailers parked while they spin their bandanna'ed selves around on zero-turn mowers. Weekends bring wider roads but busier homeowners, doing lawnmower laps for hours, spreading pellets of miracle fertilizer, or setting up sprinkler systems to water a few feet of their grass and half of the street.

Given municipal budget constraints, I've always found it generous that folks take it upon themselves to try to grow nice streets. Very community-minded.

But seriously: How did grass – grass – become a status symbol? What is it that motivates millions of Americans to devote immeasurable money and time to growing something so impractical, so conformist, so puritanical?

"Nowhere in the world are lawns as prized as in America," writes Michael Pollan in a 1989 essay. "In little more than a century, we've rolled a green mantle of grass across the continent, with scarcely a thought to the local conditions or expense. … Like the interstate highway system, like fast-food chains, like television, the lawn has served to unify the American landscape; it is what makes the suburbs of Cleveland and Tucson, the streets of Eugene and Tampa, look more alike than not."

So much for rugged individualism.

We're so obsessed with turf grass that it's our biggest crop – a fact that floored me in an article by Charles Eisenstein last year.

You can't eat it, you can't make pants or rope or protein powder out of it, you can't weave or build with it. You can't really even grow it – at least not the "pretty" kind – without chemical pesticides and fertilizers that compromise the health of our soil, water, and selves.

In "Looking for Lawns," published on NASA's Earth Observatory website, Rebecca Lindsey writes, "Most people don't think about the impact of their lawns in the big ecological picture. We associate 'fertilizer' or 'irrigation' with food crops. We associate 'carbon cycle' with fossil fuels and deforestation. But [NASA scientist Cristina] Milesi believes there are good reasons to think about the impact of lawns on the national water and carbon cycle."

Lindsey's piece is from 2005. In 2013, a study published by the Soil Science Society of America concluded that "More carbon dioxide is released from residential lawns than corn fields."

Why do we cling to the idea that an enormous green lawn around a home or business is a sign of prosperity? How much money (or water, or struggling species habitat) could we save if we planted something edible, or at least native and diverse? How many people could be fed by what we could grow in these giant, underused spaces?

Last August, Milesi and other NASA researchers published newer findings, concluding that turf grasses are "the single largest irrigated 'crop' in the U.S., occupying a total area three times larger than the surface of irrigated corn.

"If the entire turf surface was well watered following commonly recommended schedules there would also be an enormous pressure on the U.S. water resources," NASA researchers explain. "At the time of this writing, in most regions outdoor water use already reaches 50-75 percent of the total residential use."

Widespread attention on this study likely owes a lot to the timing of its release, in the wake of ongoing drought and residential water use restrictions imposed in California and elsewhere.

Since reading it, I've thought a lot about the lawns in our area. Giant, non-native mown spaces with no functional use, which – in many cases – require fossil fuels, chemical amendments, and irrigation during dry spells.

And for what? Why do we cling to the idea that an enormous green lawn around a home or business is a sign of prosperity? How much money (or water, or struggling species habitat) could we save if we planted something edible, or at least native and diverse? How many people could be fed by what we could grow in these giant, underused spaces?

How much time would we suddenly have, if we didn't have to work extra to pay for lawn care, or do it ourselves in what's supposed to be our "free" time?

It's not easy being green. Time to tell turf grass to sod off.