Anti-war and pro-veteran: a patriot's dilemma. 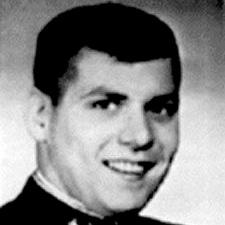 I bought the bracelet from veterans running the POW/MIA booth at the Crawford County Fair that year. One had known Broms, he said.

The cuff glides over the tattoo inside my left wrist: a musical staff with the notes of the word "wanderlust" from Joni Mitchell's "Amelia." I've had fifteen more years of life than Broms to indulge my wanderlust. For all I know, the same impulse helped draw him to Vietnam.

On my wrist, Broms has hiked in the Pyrenees, the Andes, and through the volcanic terrain of the Azores. He's walked endless desert trails and driven countless blue highways. Among grizzly men who may have witnessed the same war he didn't survive, he's seen Emmylou Harris play a little fairground in Ninilchik, Alaska.

Except that he hasn't. And no number of reflective moments on my part can change the fact that I've never had to see what he saw, and I've gotten to live past my twenties while he did not.

Turns out Broms' name adorned a lot of wrists over the years. And in 2011 – 36 years after his plane went down in North Vietnam – his remains were positively identified. He was buried at Arlington National Cemetery a year later.

I'm completely anti-war. Some will say that's naive, but I say it's naive to think that war is the path to peace; or that it isn't more accurately a leveraging tool employed by the elite to maintain their power and profits.

Nevertheless, I'm completely pro-veteran, though it feels hypocritical to also pay taxes to a military industrial congressional complex that fails to properly support its veterans upon their return home: an undoubtedly confounding place where things largely operate as though nothing bad is happening half a world away.

Now that Broms is home, I've kept wearing his name as a reminder not to squander this precious life. And to try to find the courage to be, as Thoreau would have it, a "counter-friction to stop the machine" that implies it's more patriotic to fight people than to feed them.