Keep It Classy And Buttoned Up With blouses. 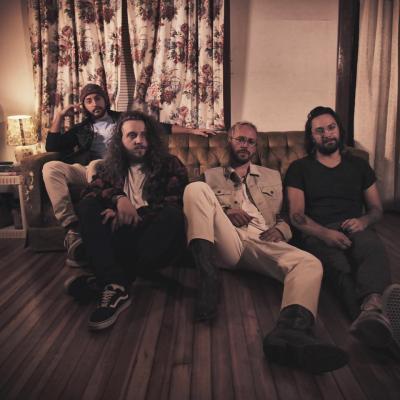 They've had time to Eat Glass since Valentine's Day with the release of their debut, and now that they've cut their teeth, new local rock alternative band blouses. is ready to show Erie what they've been working on during this very long yet productive quarantine hiatus.

With a post-hardcore sound reminiscent of bands like Everytime I Die or Touché Amoré, the band came to be after members Derek Hoenes and James Quirk spent a long night binge watching the iconic sketch comedy series Chappelle's Show (i.e., the classic "shirts vs. blouses" skit wherein Prince's flamboyantly dressed squad schools Charlie Murphy's in a game of pick-up basketball). After creating the name and playing around with frequencies, melodies, and lyrics, they recruited the rest of the bandmates — Quirk's brother Dominick and Anthony Liotta.

Vocalist and songwriter Dominick Quirk has been in the music industry for a few years now, with experience in the local band Closing Remarks previously. Contradicting his naturally calm demeanor, this man will wow you on the microphone with high pitched screams that stay in sync with every melody being played in the background. He states, "I focus on the sounds in my head flowing into the poetry essentially, which then follows into lyrics and comes together when all of us practice and perform."

James is the band's drummer and is no stranger to the music scene. He started his career around 14 years ago and is well-known for his work with VWLS. From hardcore to psychedelic to rock alternative, James has proven adept at switching up the vibe whenever necessary.

Hoenes, who is considered by all members of the band to be "the backbone of it all," plays one of the most important roles as guitarist. Previously, he played together with bandmate James in Sea of Teeth. With his own unique style, he lays the groundwork that lets the rest of the band be equally as creative.

Last but certainly not least is Liotta, who has been a blessing in disguise since his late arrival. He picked up the bass after dabbling in both guitar and piano in his past. He continues to learn as he goes while playing with the band because he says they offer him "structure and discipline." The band as a whole also offers a big thanks to Shawn Hammer, who was there from the beginning recording every bit of material produced during their come-up.

Their premiere performance was right before Halloween with a socially distanced underground showcase. This was the beginning of growing their fan base outside of social media. With the newly released music video for the song "Burn and Repeat," directed and filmed by DOMMY of Crew Life Productions, they now have visuals to offer. "Burn and Repeat" is also one of the songs from their newly released eight-track EP Eat Glass that came out on Valentine's Day. These platforms provide positive outlooks for the near future, especially with the hopes of venues re-opening for live performances.

"Even though we weren't rushed to create anything, and we had that time to create whatever without a time frame, the worst part of it all was that we couldn't show off all the material we worked so hard putting together," expresses James. Despite their angst about their limited ability to perform live, they have continually drawn their audience in with the production of upcycled merchandise and are slowly but surely working on another album and music video release.

"Just give us a shot. Although we play whatever we want, we do it because we don't want to think too much about it, which is something everyone can be found guilty of. If you just go with the flow and give our music a chance, you'll appreciate it and us," says James. In the Chappelle's Show episode, Murphy states, "Don't judge a book by its cover." Because you never know who will win.

Symoné Crockett can be reached at symonec@eriereader.com