King Gizzard and the Lizard Wizard // Fishing for Fishies 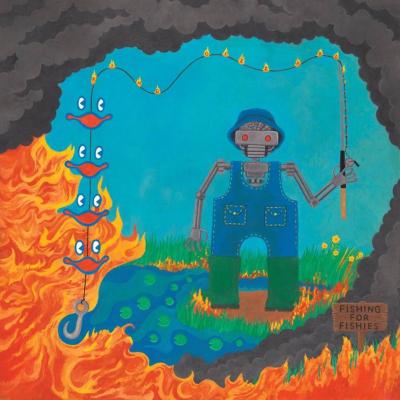 King Gizzard and the Lizard Wizard

To call King Gizzard and the Lizard Wizard a novelty act would be a hell of an understatement. While the majority of the Australian psych-rockers' discography (including a five-album run in 2017 alone) does lean on a number of impressive gimmicks, the tricks were always second to the band's ambitions and impressive technical skill, which leads us to wonder what exactly happened with Fishing for Fishies. The band's return from their 2017 run may be their first truly failed experiment, although to be fair, the musicianship is still at the forefront of this uneven record. There's not really any large leaps taken here; while King Gizzard and company do explore a deeper, more traditional brand of blues here than usual, it's a pie the band has always had their fingers in to some degree. While new instrumentation (including plenty of harmonica) is welcome, it's also never truly utilized, leading to an album that sounds like nine extended takes of the Roseanne theme song. By the time we reach the album's plodding conclusion ("Acarine" into "Cyboogie"), we're treated to the same regurgitated psuedo-futuristic technobabble that's present (and more pleasant) on past releases.
— Aaron Mook