King Gizzard fulfilled their promise to release five albums over the span of 2017. 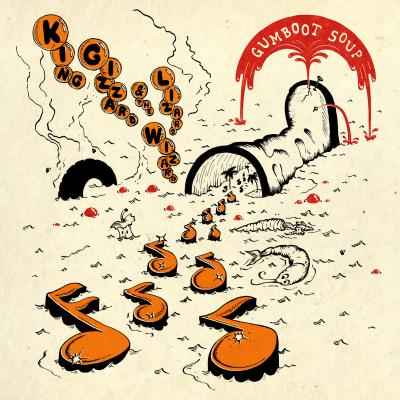 They actually did it. With just days left in the year, King Gizzard, the prolific Wizards, released Gumboot Soup, thereby fulfilling their promise to release five albums over the span of 2017. And while Gumboot Soup also represents what one might expect the last of five albums crafted in less than 12 months to sound like — a bit mismatched, to say the least — it's still a daring collection of psych-rock tracks that clearly represent the band's ambitions. Gumboot Soup's biggest weakness is that it simply feels like a collection of B-sides and loose ends following four stronger, more cohesive projects. Single "Greenhouse Heat Death" utilizes the microtonal tuning used infamously on Flying Microtonal Banana, while "Muddy Water" brings back the woodwind instruments that marked Polygondwanaland. But new sonic experiments manage to pull the weight here, from the unexpected pop sheen of opener "Beginner's Luck" to the sludgy doom riff of "The Great Chain of Being." It's unlikely that Gumboot Soup will be the 2017 album to stand the test of time when it comes to King Gizzard's eclectic catalog, but it's an impressive achievement and a strong indication of the band's talents nonetheless. — Aaron Mook

Murder on the Orient Express

The Last Days of Judas Iscariot by Stephen Adly Guirgis

Raise a Glass for Arts & Drafts