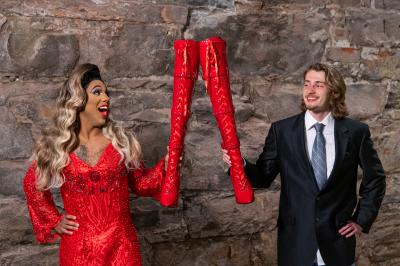 Winner of six Tony awards, including Best Musical, Kinky Boots is a hilarious and uplifting story that shows us we may have more in common with each other than it seems.

Charlie Price finds himself the new owner of the family's shoe factory after his father dies. Reluctantly, he takes on the business only to discover that it is on the verge of bankruptcy. Not wanting to let down his father's legacy, Charlie tries his best, but ultimately begins laying people off from their jobs, preparing for a fate that seems inevitable.

However, a suggestion from one employee and a chance encounter with a drag queen named Lola sparks the idea for what could potentially save the family business: high heeled boots designed specifically for drag queens. What follows is a story of determination, passion, and perseverance.

With its book written by Harvey Fierstein and music and lyrics by Cyndi Lauper, Kinky Boots premiered on Broadway in 2013 after a brief stint in Chicago in 2012. Since its debut, many famous names have crossed the stage as both Charlie and Lola over the years. The role of Charlie has been played by Brendan Urie of Panic! At The Disco, Jake Shears of Scissor Sisters, and Tyler Glenn of Neon Trees, to name a few. Lola's role has also seen its share of famous names, including Billy Porter in the original Broadway cast, Wayne Brady, and Todrick Hall. The Erie Playhouse's production of the show will feature Brent Hetrick and Curtis Jones III as Charlie and Lola, respectively. — Ally Kutz