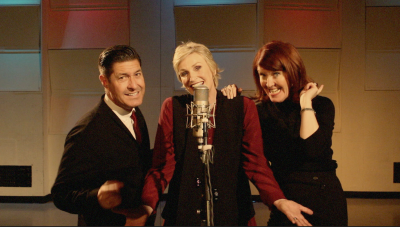 YouTube
Jane Lynch (center), best known for her role as Sue Sylvester on the hit TV series *Glee, will be joined by Tim Davis (left) and Kate Flannery (right) for *Jane Lynchu2019s Swinginu2019 Little Christmas*, a u201cUSO-style variety show that offers something for everyone,u201d according to MIAC director Brett Johnson.

Every so often, Erie gets a performance so unique in its description and so original in the things it promises that it's able to turn even the most unexpected heads. By all counts, Jane Lynch's Swingin' Little Christmas is one of those performances.

"Jane Lynch's Swingin' Little Christmas is a USO-style variety show that offers something for everyone," says Brett Johnson, director of Mercyhurst's theater program and the Mercyhurst Institute for Arts & Culture. "[It's got] side-splitting comedy, masterful musicality, witty banter, and holiday cheer."

Johnson's explanation is a great tip of the iceberg, but the show only becomes more intriguing as one begins to peel back the layers of each performer and what they bring to the show.

Jane Lynch is both an Emmy and a Golden Globe winner for her role as Sue Sylvester on Glee, but she's also widely known for her work in landmark 2000s comedies such as The 40-Year-Old Virgin, A Mighty Wind, and Talladega Nights: The Ballad of Ricky Bobby. Lynch is joined by Kate Flannery, best known for her role as Meredith Palmer on The Office, as well as recent appearances on The New Girl, Another Period, and Brooklyn Nine-Nine. The pair is rounded out by Tim Davis, who has produced music and sung next to Lady Gaga, Josh Groban, and Childish Gambino. Flannery and Davis have performed as Lynch's sidekicks in the past, with both being featured in her "anti-cabaret show," See Jane Sing.

Together, backed by the Tony Guerrerro Quintet, the trio will perform both original compositions ("Sentimental Christmas") and covers ("We Three Kings," "Up On the Housetop"). This hit show was even released as an album in 2016, with "Winter's Never Cold (When You're Around)," an original Tony Guerrerro composition, reaching No. 8 on the Billboard charts. For anyone still unconvinced that this is a must-see show, a quick listen of the record might be the perfect way give your holiday spirit a much-needed test drive. — Aaron Mook