Big issues remain, incumbent hopes to do the same 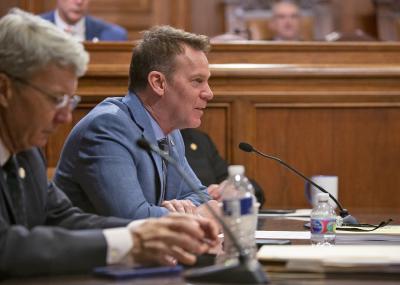 Education, employment, environment, healthcare, economy, infrastructure, crime, social equality — at any level of government, these issues ensure that lawmakers will always have their hands full. For Pennsylvania's state senators, the past four years have been challenging; the next four, on the other side of a global pandemic, will be trying. Senator Dan Laughlin, representing the state's 49th Senatorial District (which includes a sizable majority of Erie County), has been in the mix in Harrisburg since 2016 and seeks to continue his work there through 2024. The incumbent will run on the Republican ticket unopposed this November, facing off against the winner of next month's Democratic primary, either Andre Horton or Julie Slomski.

Big issues don't have easy solutions, but Sen. Laughlin was able to touch on some of the immediate tasks at hand during a recent phone interview.

Matt Swanseger: I first want to discuss whether you agree or disagree with the governor's approach to reopening the economy. And if not, do you think there's a better way to go about it, wherein we can balance public health and safety with the need to get things back up and running?

Dan Laughlin: I'll try and be as brief as possible. I was very supportive of the governor's initial shutdown order for flattening the curve. And I think it was fairly successful actually — the fact that we have fairly low numbers in Erie County is indicative of that.

MS: You're philosophically opposed to big government spending. But there are a lot of folks out there who are either financially struggling right now, or will be soon. Is there any alternative to major government intervention in situations such as this?

DL: We do know that the government plays a role in a crisis like this. I think the stimulus checks approach was appropriate. And I think it will help our economy in many ways. Now, the one thing that I will also clarify is that when the initial CARES (Coronavirus Aid, Relief, and Economic Security) Act was being discussed, I wrote a letter to Senator Toomey and Senator Casey indicating that I felt that our unemployment should have been capped at 90 percent of full pay, because that would have been virtually the same as true take-home pay. And I think that was an appropriate amount. The $600 extra is starting to become a problem where employees are making more money. They don't want to return to work.

MS: Once this blows over, how much will the pandemic have disrupted some of the initiatives to fund startups, stimulate growth in our job market, and keep young people here? Do you think Erie will be able to pick up where it left off in terms of the progress it'd been making?

DL: First off, our entire economy has been greatly disrupted by this pandemic. And I think I think that our workforce will have probably changed forever. As we emerge from this, I think there's gonna be a lot of folks that realize that they can safely and efficiently work from home and maybe won't ever return to a more traditional workplace setting. On some level, I think our growing tech industry has probably fared a little bit better than some of the more traditional types of employment because, with a lot of tech jobs, you can work from home.

So I think that's a really good thing to have — more of a diverse workforce in Erie then perhaps we had years ago with the reliance on heavy manufacturing. But as we come out of this, I think a lot of people —myself included — and other government officials will have to adapt and adjust to see where the need is greatest and apply whatever stimulus tools we have to try and bring industries back and help businesses survive.

MS: I want to touch on education next. Public schools are bracing for some tough times ahead, in addition to the adversity they've faced for quite some time now. Erie School District Superintendent Brian Polito recently froze his own pay in anticipation of more budget shortfalls. What is being done at the state level to preserve public education and if in-person classes are not permitted to resume in August or September, how can we support distance learning without sacrificing quality?

DL: I would say that the lack of broadband Internet to vast areas of Pennsylvania is something that the legislature had been working on already before the pandemic, but I think it really brought into focus just how badly it's needed. And it's going to be extremely difficult to provide a fair standard of education for all the public school kids across the state when there is such a disparity in both funding and Internet access. I'm extremely hopeful that we'll have returned to class in the fall, but if not, we at least have some number of months here to try and prepare.

MS: Environmentally. Erie has some major concerns right now in terms of the high water levels and erosion. And as we know that has huge implications on recreation, tourism and the overall economy. Has there been any motion on mitigating these issues?

DL: I'm actually glad you brought that up. As some of your readers will probably remember, I've been working on trying to do something with the breakwaters at Presque Isle. I find them to be basically eyesores and I don't believe that they're working very efficiently … My office is currently researching the famous Plan 2014, part of the Great Lakes Compact. And I believe that actually has a little bit more to do with the high water levels in Lake Erie right now than anything else. We're trying to get to the bottom of that because we can't just let Presque Isle get destroyed. It's a vital part of our economy and a natural treasure.

MS: Absolutely. What other alternatives to breakwaters have you explored to limit the erosion?

DL: I'm glad you brought that up as well. There is an alternate method of doing breakwaters known as an artificial reef. I discussed it with the Army Corps of Engineers a couple of years ago. I'm trying to get the state and/or federal government to pay for a fresh study that would study that type of a breakwater system. The beauty of that from what I understand is that it will provide a more natural-looking shoreline rather than that scallop that we have now.

MS: Are there any other proposals or bills in consideration right now that you're really passionate about, that you're really pushing for and putting your weight behind? Explain why they mean so much for you and how they could mean a lot to your constituency.

DL: I think one of the most impactful bills that I'm working on right now hasn't gotten that much press yet. It's a bipartisan bill that (Philadelphia Democrat) Sen. Sharif Street and I have been collaborating on. He came on in 2016 when I did, and even though he's vice-chair of the Democratic Party, if I'm not mistaken, and it's kind of his job to get rid of me, we've become pretty good friends.

We work together pretty well on a lot of items and we are working on a pharmaceutical transparency bill that would lower prescription drug costs for most Pennsylvanians that are struggling with the cost of pharmacy. It's gonna take a lot of work to try and get it passed, but I feel confident that between Sen. Street and I, we can get the traction that we need.

MS: Sounds good to me. Is there any other message you'd like to leave our readers with before I let you go?

DL: I think there's one thing that a lot of your readers might be surprised to find out that I'm a huge fan of solar energy. I think that solar is probably going to be what replaces our fossil fuel energy industry. I mean, we have a ways to go. But I see it as the cleanest, most environmentally and economically friendly source of energy that we have. And I think that we should be putting a lot more effort towards that. And I introduced a bill concerning that a few weeks ago.

MS: Excellent. Thank you Senator for your time.