Laugh/Riot Performing Arts Company, the resident theatre troupe at Edinboro University, will be performing the Tracy Letts dramedy as their first 2016 presentation. 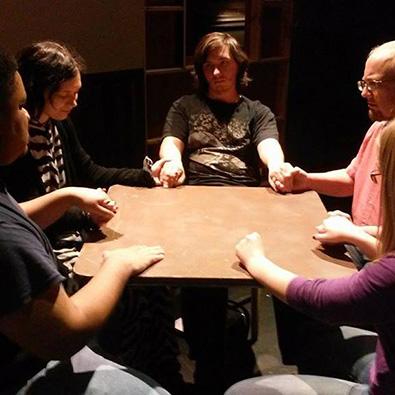 Laugh/Riot Performing Arts Company, the resident theatre troupe at Edinboro University, will be performing the Tracy Letts dramedy as their first 2016 presentation.

Owing money to nefarious sources, Chris, a down-and-out drug dealer, decides to have his mother, Adele, murdered for her life insurance policy payout. Chris hires Joe, a police detective who moonlights as a hired killer, to perform the matricide. However, since Chris is unable to afford Joe's fee, Joe suggests he temporarily use Chris' simple-minded sister, Dottie, as collateral (as well as a sex partner) until the insurance money is issued. With his father – Adele's ex-husband – and his new wife, Sharla, all involved in these unconscionable cahoots, the deed is done – with unexpected results.

According to Morgan Gore, who portrays Killer Joe: "I think audience reaction will be a mixture of "I don't know how I feel about what I just saw," and "Okay, then ..." and "This is awkwardly entertaining."