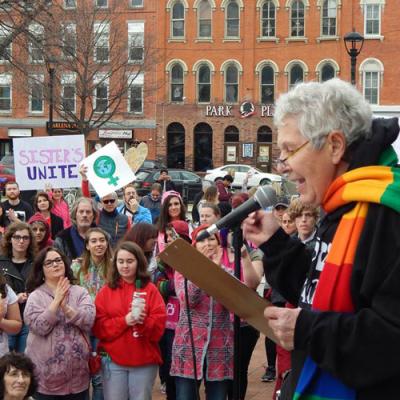 On June 26, 2015 LGBT communities throughout the world cheered the Supreme Court's ruling on the right to same-sex marriage. What a leap into mainstream culture! Having advocated for such rights, I was overjoyed, knowing that if my partner were living today, we could marry, and I would not be socked a 15 percent inheritance tax on half our joint assets, as I was 12 years ago. Today, I would be free from such discrimination.

But the legalization of same-sex marriage has not helped everyone out of the closet. The freedom to marry did not come with human rights protection. Simply put, you can marry today, but tomorrow you could be fired from your job, or ousted from your rented living quarters, or denied services, because there is no protection from such discrimination. The amount of freedom or the number of rights you have is highly contingent on where you live or how accepting your employers or peers may be. Fortunately, in Erie County, we do have an anti-discrimination ordinance, but that is not the case in all Pennsylvania counties or in many parts of the country.

Since the legalization of same-sex marriage, over 100 anti-LGBT bills are pending throughout the United States. There has been a horrendous backlash fueled by the religious right. You may be familiar with the "potty bills" barring transgendered persons from using bathrooms that match their gender identity; but it may be news to you that some bills allow healthcare professionals to refuse treatment for mental or physical problems, nursing home personnel to decline services, judges to refuse marrying same-sex couples – and even laws to prevent local governments from passing non-discrimination protections such as the one we have in Erie County. Some of these bills are so sweeping that they not only discriminate against LGBT people, but extend to single mothers and anyone with a sexual relationship outside of marriage.

One might ask, who would propose such mean-spirited legislation? Equality for same-sex marriage had hardly begun, and the religious right immediately commenced erecting barriers implementing the same tactics used in the anti-abortion movement.

Many religious persons of faith urge compassion and inclusiveness; however, they are overshadowed by their powerfully endowed religious institutions such as the Roman Catholic Church, the Orthodox Jewish movement, the Southern Baptist Convention, and other fundamentalist Christian and non-Christian institutions who protest LGBT rights, cry foul, and lobby politicians who in turn pick up their banners.

Our legislators are allowing our constitutional rights to be bought by religious institutions that intend to preserve their bigotry – a bigotry that goes so far as to proclaim what God thinks, wants, and needs on behalf of their private interests. Under the guise of religious liberty, these bills allow individuals, businesses, and tax-funded organizations to ignore laws that conflict with their religious beliefs about marriage and sexuality. This is legalized discrimination; legislators must be held accountable.

In a civil society such as ours, we must maintain a separation of church and state. No religion should have the right to dictate or superimpose a particular religious belief on others who do not share that belief.

Let us be reminded of the dangers of allowing matters of religious beliefs to permeate the law: the time when interracial marriages were illegal, women were denied the right to vote, blacks were denied civil rights, women and children were denied protection by the law, married individuals were denied divorce, and women called witches were burned at the stake. Throughout history, individuals have suffered under religious institutions and beliefs – beliefs that supported slavery, apartheid, segregation, and even opposition to the Magna Carta.

To codify religious beliefs into law is dangerous; it threatens our democracy and undermines the rule of law creating a Taliban-like society filled with divisiveness and sectarianism. There is no peace in such a society.

What has happened? How have we allowed a suppressed citizenry in a self-declared free country? In speaking for the LGBT community, I am here to say we are you: rich, poor; black, white; men, women; mothers, fathers; sons, daughters. We are people with the same needs and similar desires and aspirations. We are you.

We must stand together, each supporting the other so that all of our human and civil rights may be manifest.

We must stand together, each supporting the other so that all of our human and civil rights may be manifest. We must hold our legislators accountable to our constitutional rights and also to our unalienable right to life, liberty, and the pursuit of happiness. Let us uphold one another. By uplifting the rights of others we can uplift our own.

Doris Cipolla holds degrees from Villa Maria College and Case Western Reserve University. She is a secular humanist. After her partner Charlene M. Tanner's death, she became  an advocate for LGBT rights. Cipolla also funds the Charlene M. Tanner Speaker Series, inviting known individuals who focus on social justice, peace and the environment. A version of this message was given at the Erie Women's March. She can be contacted at dtcipolla@gmail.com