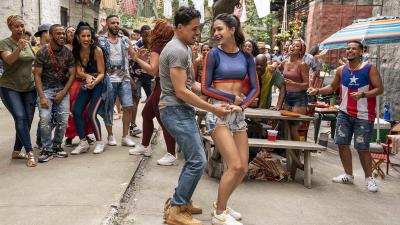 As a fan of the big, bombastic movie musicals from Hollywood's Golden Age, I always hold out hope that a new musical will come along and take audiences to those same dizzying, Technicolor highs. We came close with La La Land, but even that lacked some of the energy that the old classics had in spades. Now Lin-Manuel Miranda's stage play In the Heights has its own film adaptation to bring that same spectacle to a new generation. While the musical numbers are appropriately energetic and fun, the overstuffed storylines and meandering plot sometimes make this a chore to sit through.

Usnavi (Anthony Ramos) tells us the story of when he was a bodega owner in Washington Heights, a mostly Latin/Caribbean neighborhood in New York City that we're told is slowly disappearing. Usnavi has dreams about closing his store and retiring to the Dominican Republic but he is conflicted about leaving his neighborhood. This story is interspersed with others in Washington Heights, including that of Nina (Leslie Grace), who is torn between staying in college or returning home, and Vanessa (Melissa Barrera), who dreams of becoming a fashion designer.

While the actors all play their characters well, the various conflicts are often too surface-level to fill the entire runtime, and as a result, the movie drags during its second half. However, the musical numbers are the real attraction here and they are all joyous, kinetic experiences with dazzlingly creative camerawork and the talented singers giving us everything they have. The hip-hop/salsa inspired songs make it worth sitting through the sometimes less-than-engaging spells.
— Forest Taylor