Little Stranger and SoDown Shake Up the KRC 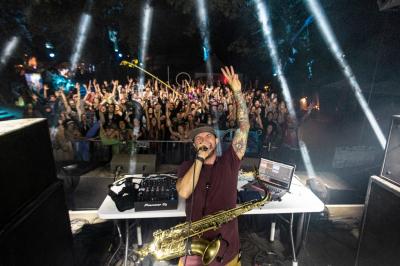 Are you ready to get a little strange with SoDown? The King's Rook Club ends the month with two jam-packed nights that will include music for both hip-hop fans and EDM bassheads alike.

The start of the weekend brings indie hip-hop duo Little Stranger from Charleston, S.C. John and Kevin Fields, aka Leafeater and Classic Kevin, will perform all original songs that are brought to life by their hard-hitting, in-your-face theatrics. They were dubbed "Hip-Hop Act of the Year" in 2016 and 2017 in the Charleston City Paper Music Awards and recently performed at the 2019 Night Lights Music Festival in Sherman, N.Y.

The following day, Ehren River Wright (aka SoDown) will be headlining in the downstairs concert complex as he transcends sounds of electronic sub-genres while playing some saxophone throughout the night as well. Wright is a music producer and a part of Michigan-based producer DJ GRiZ's music label. His live sets contain his own personal blend of music which he separates into three distinct categories: SoHeavy, SoGroovy, and SoChill. He creates a sensory experience and an immersive setting throughout with his bass-centric productions, which have made for his vast fan following. He has previously taken the stage at places such as Red Rocks, Coachella, and Electric Forest.

Opening both nights will be Brandi "FRESCO" Carlini, whose performances have been taking off in the local Erie music scene. "I am so excited to perform at my favorite place to go in Erie," exclaims FRESCO. Having once performed in the upstairs concert complex, she is prepared to get the crowd on their feet and in the groove. Following Fader Zim's (aka Kenneth Davison) set on Saturday evening, FRESCO will end her set with a brand new song titled "Electric" which she wrote specifically for the SoDown show. "I'm excited for my fans to see where I'm at and most importantly I hope you're ready to dance!" — Symoné Crockett