Long in the Beard, Long in Staying Power 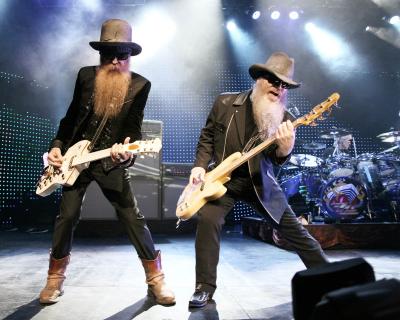 Hard to believe, but that "Little Ol Band from Texas," otherwise known as ZZ Top, has been bringing their unique brand of Lone Star blues-rock to audiences for 50 years now. That longevity is notable enough, and what's even more impressive is it's been the same three musicians — singer/guitarist Billy F. Gibbons, bassist/singer Dusty Hill, and drummer Frank Beard (famously the least bearded member of the band) — for the entire ride, and for almost all of those five decades, this trio has managed and maintained arena-level popularity.

The sound and personal chemistry, it turns out, is something Gibbons, Hill, and Beard have experienced literally from the first notes they played together.

"Funny thing, our first, I'll call it 'jam session' together, Dusty was in line to pick up the bass guitar and throw his hat into the ring. And what was going to start up as a three-minute shuffle in C turned out to be a three-hour jam session," Gibbons recalled in a late-August phone interview. "We knew something was cooking."

That initial jam session is recalled quite colorfully in the new career-spanning ZZ Top documentary, That Little Ol' Band from Texas. The film, directed by Sam Dunn, hits a lot of highlights, including how ZZ Top got started, how the group got its distinctive high-powered sound and the 1980s reboot that saw the band reach a peak in popularity and become MTV darlings.

"I think the word is 'congratulations' to the director," Gibbons said, offering his take on the documentary. "Where he came up with some of that interesting early footage is beyond us. There were things that we had never seen."

In tandem with the premiere of That Little Ol' Band From Texas is celebrating their 50th anniversary in the most appropriate way — with an extensive tour.

"It's a tough call," Gibbons said of choosing which songs to play. "We've got a soft spot in the middle of the show. We kind of rotate filling in the blanks … At the same time, there are a handful of numbers that we just can't let the night go without laying down … It's a well-rounded set list, all in all."

In ZZ Top's early years (even after the group notched a breakthrough hit with the song "La Grange" from its third album, Tres Hombres) the music press seemingly didn't quite know what to make of the band's blues-rooted, Texas-infused style of rock. That's a key reason why the band decided to bring a bit of the Lone Star State to the rest of the country in the mid-1970s on the "Worldwide Texas" tour. The famous outing had the band joined on stage by live animals, including a buffalo, a steer, and a buzzard, the latter of which hung out near Beard's drum set.

"The only time it got sticky was when the buffalo made his escape," Gibbons recalled. "One afternoon we played Three Rivers Stadium, and I'll never forget seeing the trainer in a golf cart trying to catch up to the buffalo stampeding and zig-zagging across third base to home plate."

ZZ Top stayed popular into the early 1980s, when a convergence of factors — the arrival of sequencers and other recording tools, the debut of MTV (which aired the groundbreaking videos for the hit songs "Legs," "Gimme All your Lovin'" and "Sharp Dressed Man") and some inspired songwriting — made ZZ Top mega-platinum superstars (with Gibbons and Hill debuting their newly grown outsized beards).

The makeover in the ZZ Top sound wasn't planned, but the group liked the new sonic toys.

"We still had one foot in the blues," Gibbons said of the band's updated '80s sound. "It really anchored what ZZ Top was all about. We never strayed all that far away from it."

Gibbons said ZZ Top may still have more albums to make. In recent years, though, Gibbons has stepped out as a solo artist, releasing the Cuban/Latin-influenced Perfectamundo in 2015, followed by the aptly titled The Big Bad Blues in 2018.