Love From A Stranger: Agatha Christie's chilling thriller coming to All An Act stage 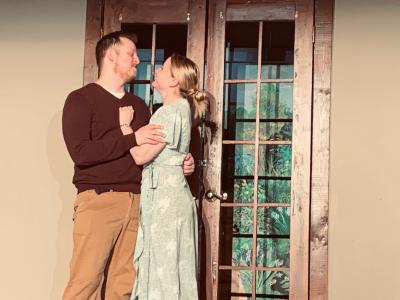 Cecily Harrington's life has, up to this point, been uneventful and lacking in excitement. But when she wins a large sum of money, she realizes that she longs greatly for a life of adventure and intrigue.

Around the time of her winnings, a handsome and charming stranger named Bruce Lovell happens to come into her life, sweeping Cecily completely off her feet and into a whirlwind romance. In this new life of boldness and intrigue, she carelessly begins abandoning everything of her former life: her job, friends, and even fiancé are all left in the past in exchange for a life in a country cottage, a remote and blissful background to her new adventure.

However, everything is not what it seems with this new love from a stranger. They say that fortune favors the bold, but will Cecily's luck run out just as she's gotten ahold of it?

This is, of course, the setup for Agatha Christie's classic, Love From a Stranger. The play premiered in 1936, based on a short story by Christie penned in 1924. The play saw two film adaptations, one in 1937 starring Basil Rathbone and Ann Harding, and another one decade later starring John Hodiak and Sylvia Sidney.

The local theater company All An Act will be staging their own production in February, directed by David W. Mitchell. Starring in the play will be Marie Glaser, Adele Crotty, Ben Robson, Betsy Butoryak, Stephen Salchli, Michael Meyer, Olyvia Lozano, and Wayne Gardner. The production will be sure to keep you on the edge of your seat, guessing until the very end.