The story of a modern Bonnie and Clyde gone wrong 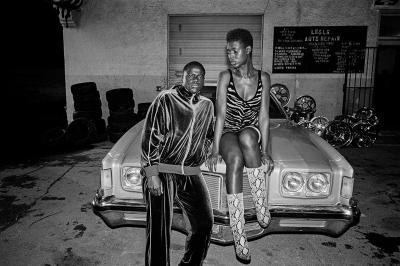 In the late 1960s, Bonnie and Clyde showed us a couple put upon by society, hitting the road in a kind of "us against the world" act of defiance. Melina Matsoukas (Lemonade) attempts the same thing with her film Queen & Slim, a film that owes a debt to that story but with a modern twist on the circumstances. Though it boasts occasionally admirable filmmaking, the movie never quite reaches its lofty ambitions.

The plot centers around two young people (Daniel Kaluuya and Jodie Turner-Smith) who meet for a date that doesn't seem to go anywhere. However, their lives are changed when they are pulled over by a police officer. While being harassed, the two kill the cop in self-defense and then head south to get out of the country. As the couple continues their tragic road trip, they learn that they have become kind-of folk heroes for many people in the country.

Like the aforementioned film, Matsoukas presents her film as a tale of doomed love on the run. However, whereas Bonnie and Clyde was fine with presenting its protagonists as outright criminals, she doesn't have the courage to show hers as anything more than misunderstood martyrs. Also, the dialogue and some sequences are far too platitudinous to make the film truly engaging (including one scene in a gas station that is too ridiculous to take seriously). When the film has time to breathe with these characters, it achieves moments that are as beautiful and lyrical as a Terrence Malick film. However, those moments are too few and far between for the film to reach any kind of greatness. — Forest Taylor