Make Your Way To 'My Way: A Tribute to the Music of Frank Sinatra'

Croon along to the classics at Erie Playhouse 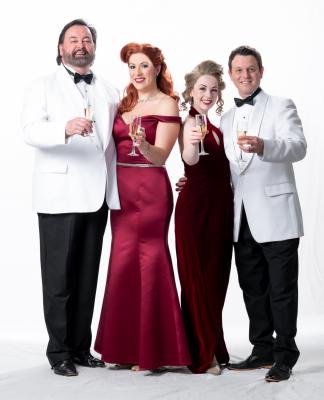 Rick Klein
Erie theater veterans Joe Greulich (left), Anna McJunkin, Kate Neubert-Lechner, and Patrick Vahey will each lend their voices to My Way: A Tribute to the Music of Frank Sinatra, premiering Friday, Feb. 25 at the Erie Playhouse.

Francis Albert Sinatra — better known to the world at large as Frank Sinatra — left a five-decades-long musical legacy that began in 1946, when he had just entered his 30s.

"The Chairman of the Board" was both myth and legend even before his death in 1998, and it took only two years for the Tennessee Repertory Theater to produce and present the world premiere of My Way: A Tribute to the Music of Frank Sinatra.

With over 500 different productions in all 50 states, My Way is now coming to the stage of the Erie Playhouse for a nine-show run.

In Erie, that cast includes Joe Greulich, Anna McJunkin, Kate Neubert-Lechner (also the executive director of the Playhouse), and Patrick Vahey. If these names look familiar, it's because all four cast members are indeed Playhouse veterans.

Audience members can expect an expressive romp through the 1950s, '60s, '70s, '80s, and '90s, following the trajectory of Sinatra's explosive career path, including movies, hit albums, and his long-running Las Vegas residency with The Rat Pack.

Snap your fingers and tap your toes along with standards like "Fly Me to the Moon," "I Get A Kick Out Of You," and — naturally — "My Way."

Guests should note that the Erie Playhouse is still under strict CDC guidance and will be requiring proof of vaccination or, for those unable to get vaccinated, a negative COVID test within 72 hours of showtime, for all patrons 12 years and older.

Audience members should also expect to remain masked for the entirety of the performance.

Relive the historic career of Ol' Blue Eyes, in an oftentimes-joyful but always-stirring review of one of the greatest musical talents this planet has ever known. — Cara Suppa