Manchester Orchestra // A Black Mile to the Surface

A Black Mile to the Surface takes pieces of what Manchester Orchestra have excelled at in the past and stretches them across 49 minutes of abstract storytelling. 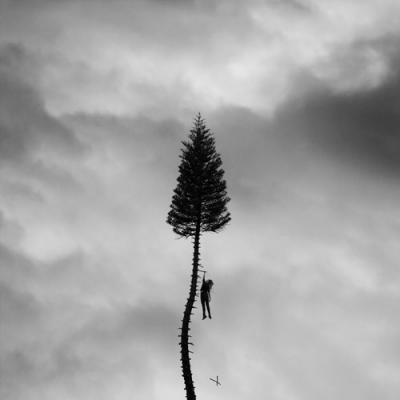 A Black Mile to the Surface

It's been three years since we last heard from Manchester Orchestra as a unit, but that doesn't mean the boys have been any less busy. Original members Andy Hull and Robert McDowell received acclaim for creating the a capella score for last year's surreal, head-turning comedy, Swiss Army Man, and on their new album, A Black Mile to the Surface, they've brought the unique influence of director "Daniels" with them. A Black Mile to the Surface takes pieces of what Manchester Orchestra have excelled at in the past and stretches them across 49 minutes of abstract storytelling and sonic experimentation that would make Radiohead proud. From the quieter moments (opener "The Maze" recalls the gentle echo of Simple Math's "Deer") to the muscular, Thrice-esque riffs of career highlights "The Moth" and "Lead, SD," Manchester Orchestra restrain themselves in a way that complements their deep and dark songwriting. Somehow managing to be a perfect distillation of the band's already impressive discography as well as a rebirth for the band, A Black Mile to the Surface plays like a living organism, constantly twisting and tweaking its own melodies until entire sections of the album become nearly inseparable.