Mapping Our Past: A Bird's Eye View of Pennsylvania

by Jonathan Burdick
View ProfileTwitterInstagramRSS Feed
January 2, 2019 at 10:45 AM 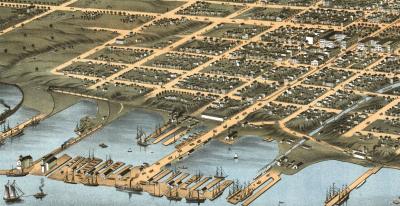 Albert Ruger, a Prussian immigrant and Civil War veteran, painstakingly composed this birdu2019s-eye-view map of Erie in 1870 with the help of a small team of trusted assistants and surveyors.

By: Jonathan Burdick
Erieites must have noticed Albert Ruger during his weeks spent in Erie, Pennsylvania in 1870. He, along with a few trusted and skilled assistants, spent day after day navigating their way up and down each of Erie's many streets, painstakingly jotting down detailed notes and making sketches of every building, every park, and every neighborhood.
Ruger, a 40-year-old Prussian immigrant and Civil War veteran, had already made a name for himself in the world of panoramic mapping. These perspective maps, which surged in popularity throughout the Victorian Era, were more artistically-styled and commercially-driven than ordinary maps. Cities and towns lobbied for the attention of panoramic mapmakers, as leaders viewed them as helpful tools in attracting new residents and industries.
By the time Ruger was surveying Erie, he was already well-known for the quality of his work. He had spent the war refining his skills by mapping various Union camps and now, five years after the war's end, he was operating his profitable mapping business out of Madison, Wisconsin. 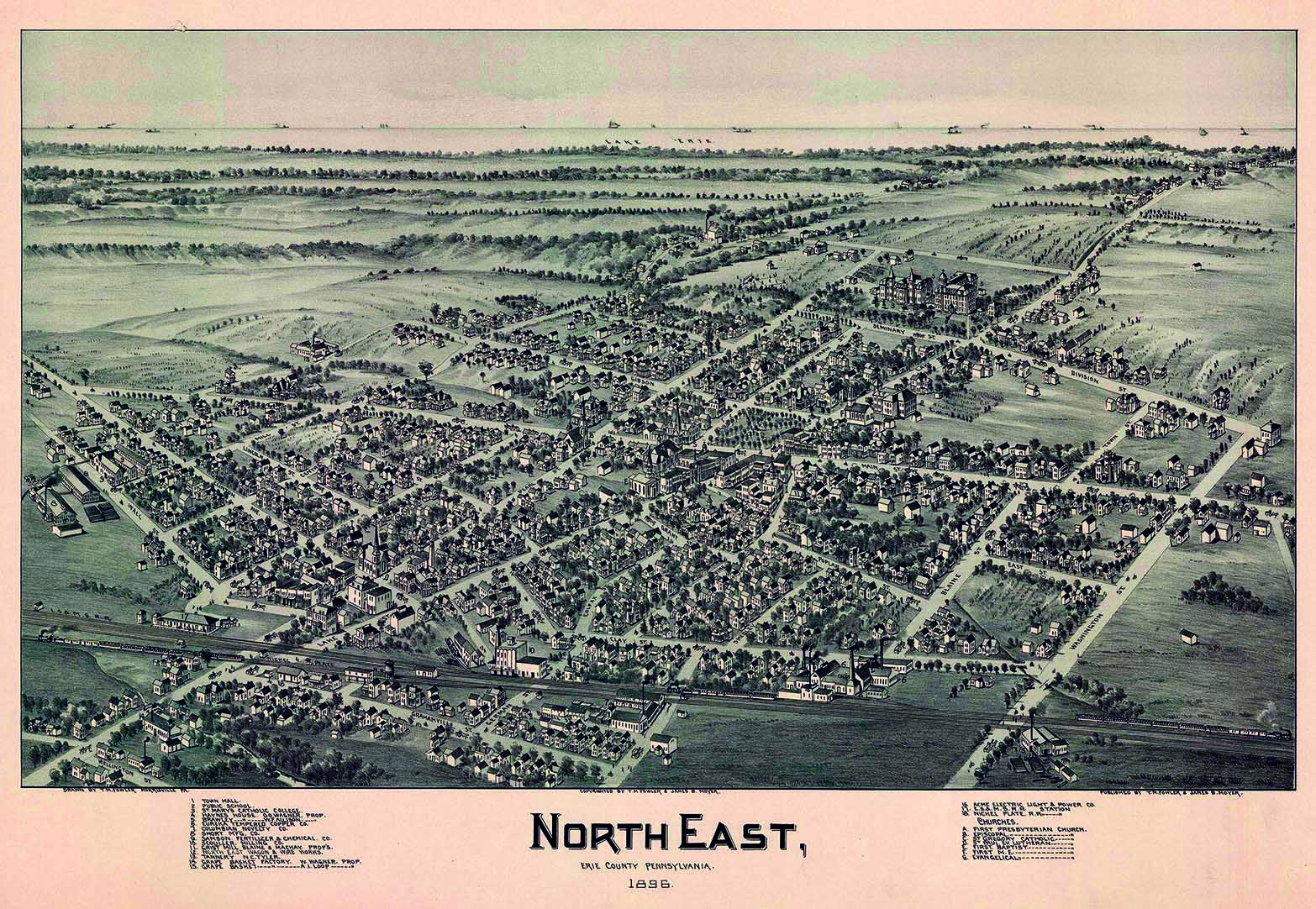 It was there that Ruger printed the first professionally-made bird's-eye view map of Erie — a panorama that provided a detailed aerial view of the city as it was in those years after the Civil War.
Around this same time, a younger man named Thaddeus Mortimer Fowler was entering the world of panoramic mapping. Fowler had spent the previous two years in Ruger's employment. He began by selling copies of Ruger's panoramas, but before long, he was assisting him with his surveying and sketches — which very likely included work on the Erie map.
Like Ruger, Fowler was a Civil War veteran. He had been born in Lowell, Massachusetts on December 21, 1842 and at the age of 15, he ran away from home. His journeys eventually brought him to Buffalo, New York and when the war between the states erupted, he tried enlisting to fight for the Union, despite only being 17. He was rejected numerous times, but finally, his enlistment was processed a half-year before his 18th birthday and he joined the 21st New York Volunteer Infantry.
During the Second Battle of Bull Run in 1863, Fowler's leg was badly injured. He allegedly refused an amputation, which saved his leg, but left him with a permanent limp. He soon received an honorable discharge and began traveling through Union camps taking tintype photographs of soldiers.
He then spent a few years working with his uncle on lithographs, followed by the two years with Ruger, before starting his own panoramic map company. Over the course of the next few years, Fowler surveyed and sketched towns and cities throughout Wisconsin, Indiana, and Michigan along with two Quaker brothers named Howard and Oakley Bailey.
Over the next few decades, Fowler relocated numerous times and he continued mapping towns along the way. He met and married a woman named Elizabeth Anna Dann, with whom he would have five children, and in 1885, they settled the family down in Morrisville, Pennsylvania.
He then directed his efforts at making panoramic maps of cities and towns across Pennsylvania, Ohio, and West Virginia. He'd be gone from his family in Morrisville for long stretches, usually traveling to a region and completing numerous panoramas before heading home.
His mapmaking continued into the 20th century when a dual-tragedy struck his family. On August 14, 1910, his wife died, months shy of her 60th birthday. Then two weeks later, his 23-year-old son Clarence ended his own life by drinking carbolic acid.
"Despondency over the death of his mother and his inability to secure work is thought to have resulted in the act," his obituary read.
The frequency of his mapmaking declined after this, but he continued working for another 12 years.
According to the Penn State University Library, which has a collection of Fowler's panoramas, Fowler produced "more Pennsylvania panoramas than any other artist of the time." He spent over 50 years drawing maps that included over 400 panoramas, over half of which were in Pennsylvania and included over 20 states and Canada.
John W. Reps, whose many books examine urban planning in the United States, called Fowler the "most prolific of all American city viewmakers." He described Fowler's style as "spare" and "mechanical," but exceptionally accurate and detailed. Fowler, Reps wrote, was focused on creating "clear and accurate portrait[s] of the towns" with "minimal artistic frills."
While he never authored a map of Erie himself, he mapped numerous locations throughout Northwest Pennsylvania, mostly between 1895 and 1897. These included Cambridge Springs (then Cambridgeboro), North East, Union City, Corry, Oil City, Titusville, Franklin, Clarion, Warren, Tidioute, Grove City, and Pittsburgh. 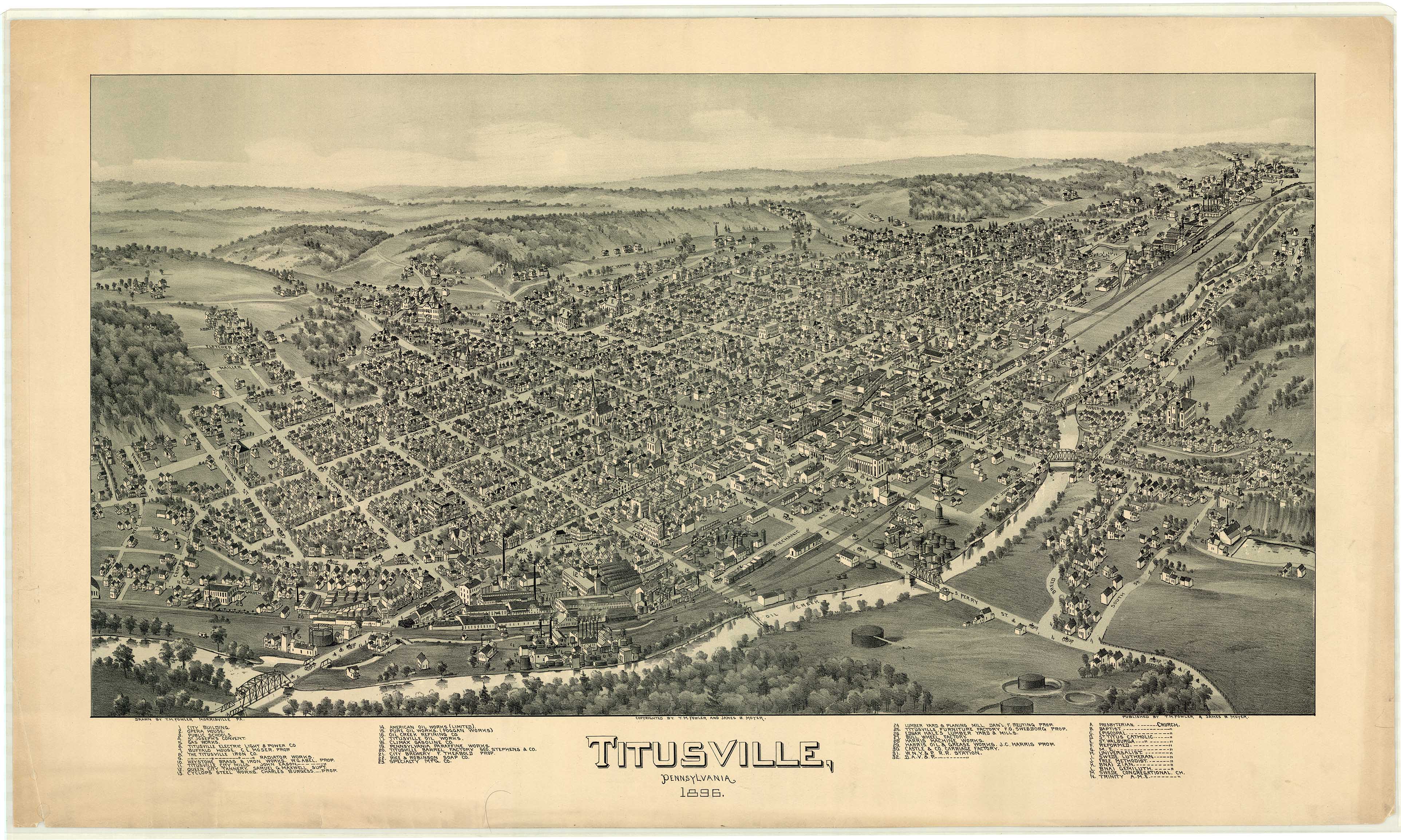 Thanks to its rich oil fortunes, the Titusville of 1896 was a boom town, as depicted by this sprawling Fowler panorama.
"Fowler gained commissions for city plans by interesting citizens and civic groups in the idea of a panoramic map of their community," John R. Herbert and Patrick E. Dempsey wrote in an essay on his maps. "After one town had agreed to having a map made, he would seek to involve neighboring communities. By noting that he had already secured an agreement for a view from one town in the area, he would play on the pride, community spirit, and sense of competition of adjacent communities."
Throughout his travels, he likely thought he had seen it all — that is until 1918, when America was involved in the First World War. That year Fowler, then in his mid-70s, was in Allentown, Pennsylvania, surveying the city for his latest panorama with his old-time collaborator Oakley Bailey. Hebert and Dempsey described what happened next.
"Airplanes and a [zeppelin] circling the city were included in the trademark of the aero view to give the impression that some of the information was derived from aerial reconnaissance, which, of course, was not true," the authors wrote. "Some Allentown citizens noticed the view with the planes on the manuscript map. In the excitement engendered by World War I, Fowler was accused of being a German spy and was jailed. Members of his immediate family drove from Morrisville to identify their father, who suffered injury only to his pride in the incident."
Whatever incidents may have happened along the way, as an older man, Reps described how Fowler expressed only his "unadulterated joy" in working on his panoramic maps — and he continued to do so up until his final days.
In 1922, he traveled to Middletown, New York to work on another panorama. While crossing the road as he surveyed the town, he slipped on the ice. His body never recovered. A few days later, he died. He was 79 years old.
Today, Fowler's legacy lives on through his many panoramic maps, most of which are still displayed in museums, businesses, and city halls across Pennsylvania today, capturing those cities and towns as they once were, frozen in time.
You can see more of Fowler's panoramas on the Pennsylvania State Archives (phmc.pa.gov) and Library of Congress (loc.gov) websites.
Jonathan Burdick runs the historical blog Rust & Dirt. Follow them on Twitter @RustDirt, and on Instagram @RustandDirt.