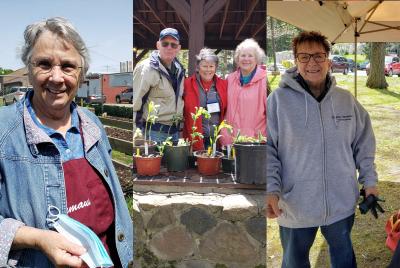 Is my rhubarb ripe enough to chop off a stalk? Will the blueberries bloom better if I transplant the bushes? Did the Swiss chard and cilantro survive our mild winter?

After two-plus years of COVID precautions, my friends and I still try to boost our spirits with daily texts and weekly Zooms. When we aren't bemoaning the state of the political landscape, I'm feeding them questions about gardening, a natural topic for those of us nurtured on early '70s works like Diet for a Small Planet and The Moosewood Cookbook.

Linda, one of my friends with a green thumb, is an official Master Gardener in Wisconsin, and I wanted to find out how to earn such a certification in Pennsylvania.

It turns out that all Master Gardener programs in the U.S., offered by extension services at land-grant universities, including Penn State, have the same requirements: mandatory coursework, community service ,and continuing education.

But to qualify as a Master Gardener, your garden needn't be fancy or formal. You can grow flowers on a small city lot or vegetables on expansive country acreage.

"I'm a flower person," said Sue Thompson, who was encouraged to enroll in the Master Gardener program after she twice participated in Garden Tour Erie.

Thompson, 58, a paramedic, is still an apprentice Master Gardener, but her expertise was on full display when she showed me around her West Bayfront home recently.

Gorgeous tulips bloomed out front, from bulbs donated by her mom, who had decluttered the gardens at the Orange County Arboretum in Montgomery, N.Y.

"I grew up in the Hudson Valley where I saw all these different historic homes with their gardens and window boxes," said Thompson. Indeed, the home she shares with her husband Erik was built in 1891 and belonged to Erik's parents, the late Betty and Jim Thompson.

She also grows Russian sage and other herbs, as well as milkweed to attract monarch butterflies. During my visit, Baltimore orioles hopped on an orange bird feeder to feast on grape jelly.

Also in 2018, Thompson began building a pergola, finishing it in 2019 so that she and her now-husband Erik could get married under its twinkling lights and flowering vines in July 2020.

Her creativity is on display everywhere: Flowers spring up in antique pickle crocks, beneath a wooden arbor, below a metal water pump, and from window boxes hung on the fences.

"I'm one of those gardeners who will plant something and if it does well, it stays. If it doesn't, it goes," Thompson said. Violets are usually frowned on because they are invasive, but Thompson keeps hers. They remind her of her grandmother and they also signify amethyst, her February birthstone.

She was temporarily stumped, though, by a cluster of forget-me-nots that sprung up overnight, outside the garden perimeters. Where did they come from?

Bonita Herman also asks questions about her own garden in southeast Erie. "I call it the Wonder Garden," joked Herman, 73. "I'll plant something and wonder if it's going to work here. Next year, I'll wonder where it will move."

Herman described her garden as a "hodgepodge." She is growing tomatoes, eggplant, peas, and radishes, and has planted squash in her flower beds. Eclectic yard art abounds.  "I have a unique little fence made out of doors and windows," she said, and she uses old ladders for props. "I was a nurse, so I have bedpans hanging from a tree," she chuckled.

As she's getting older, her endurance isn't what it used to be. "I think every gardener has attention deficit," she said. "You start to do weeding, get sidetracked, then wonder, 'Where in the devil did I put that tool?"'

Like other Master Gardeners, Herman cares deeply about the environment. She has three rain barrels, makes compost, and gives talks to garden clubs and other groups about the importance of native bees for pollination. "I guess pollinating is one of my bigger things," she said.

She sits on the board of the Erie County Conservation District, serving as the liaison between the district and the Erie Master Gardener program.

Roberta McCall, 67, became a Master Gardener when she lived in Houston. When she moved back to Erie, she got involved with the Erie Master Gardener program and later was hired as the Master Gardener coordinator. The Penn State Extension program at that time was housed at the former Pleasant Ridge Manor East on East Gore Road and had a "whole wing," she said. Master Gardeners worked closely with entomologists, specialists in pesticide-and-tree-spraying safety issues, agricultural experts on fruit and grape-farming, home economists, and the directors of the youth development and mentoring organization 4-H.

After six years at Penn State Extension, McCall went to work for the state Department of Environmental Protection. She retired from there last July.

Now, she is determined to "create my whole backyard with all native plants." She gets concerned when she hears that some people complain about their oak trees, annoyed that the trees are dropping acorns and leaves.

"The more that people keep replacing our native species with non-native, the more that diminishes our insects. We need insects to produce caterpillars," as part of the whole pollination cycle, she said.

McCall is also not fond of lawn fanatics. "People are so into grass. They love their yards. That was one of my number-one questions (at Extension). I kept telling people that lawns were created by the British. People here who think 'I have to keep up with the Joneses' should be trying to get rid of as much lawn as possible," she said.

Kevin Thomas, who chairs the Master Gardener program here, has noticed growing interest in pollinator gardens. "People realize their lawns are really green deserts; they don't provide any nutrients for the insects," he said. Some Master Gardeners are also honeybee keepers, but bumble bees and carpenter bees are also necessary, he said.

Like Herman, Thomas, 73, is a retired nurse. He got a degree in animal science from Penn State but ended up "in human medicine," he said.

"I enjoy plants. I have a large yard, a nice orchard, all of this good stuff," Thomas said. After he gave a local garden club a tour of his garden, someone suggested that he become a Master Gardener. "I was retiring and looking for ways where I could contribute and give back to the community," he said.

Master Gardeners volunteer at many gardens, including at the Housing Authority of the City of Erie's community gardens, at the Erie Zoo's pollinator garden, and at Emmaus Grove, part of Emmaus Ministries in the 200 block of East 11th Street.

Benedictine Sister Mary Miller, director of Emmaus Ministries, treasures both the serenity and the productivity of Emmaus Grove, with its tidy garden beds, artful markers made by children from the Neighborhood Art House, and its gracefully designed wooden tables used to teach gardening.

She credits the grove's success to the dedicated work of Master Gardeners and other volunteers.

Most of the fresh food – more than 2,000 pounds a year -- is distributed through the Emmaus Food Pantry, although some produce, such as herbs, might be used for Emmaus Soup Kitchen meals.

The grove idea came to fruition in 2013 thanks to Ellen DiPlacido and Rosemary Gantz.

The first gardens were planted on the south side of the Neighborhood Art House, but the volunteers had their eye on additional green space to the west of the soup kitchen.

Solomon's Porch Apostolic Assembly, at East 11th and Holland streets, owns the property, but Elder Rick Sprague agreed to let the church lot be used for the garden as long as the produce was "tithed" to the soup kitchen. Today, he's pleased with the results. "It's helping people," he said.

DiPlacido, 75, has retired twice – first, from the Department of Welfare, then from the Benedict Education Center, where she helped set up a program for refugees, many of them farmers.

DiPlacido herself wasn't always big on gardening. "I grew up on a farm and with gardens," she said. "I worked in the garden (back then) because I had to."

But she tapped into her gardening genes when she realized that she could grow healthy food for those in need in a productive garden.

Make that plural "gardens." DiPlacido and other Master Gardeners also volunteer at the Erie School District's community gardens every fall and spring. "It's gardening but it's really part of S.T.E.M. (science, technology, engineering and math)," said Kevin Thomas, the Master Gardener chairman in Erie. "When you plant plants, it's gardening but you have to do a little math and there's science involved."

That's just one more example of the ways Master Gardeners pay dividends in the Erie community.

Liz Allen hasn't found time yet to become a Master Gardener. You can reach her at lizallenerie@gmail.com.

The Penn State Extension Master Gardeners of Erie County program offers its 40-hour course in horticultural science biennially.  The next program will start with orientation in late September 2023, with classes beginning in early October and continuing through the following March.

To graduate as a Master Gardener, you must complete 50 hours of community service in your first year, then do 20 hours of service and earn 10 continuing education units annually, including five units certified by Penn State.

To get on the list for the 2023 course and to learn more about Master Gardeners of Erie County, visit extension.psu.edu/programs/master-gardener/counties/erie, where you will also find links to its Facebook and Instagram accounts.

Master Gardeners of Erie County hosts two annual fundraisers. The plant sale took place May 7, but mark your calendars for Pumpkin Walk 2022, set for Sept. 30 and Oct. 1 from 5:30 to 9:30 p.m. at Waldameer Park & Water World.