Her story is part of Erie's Black history 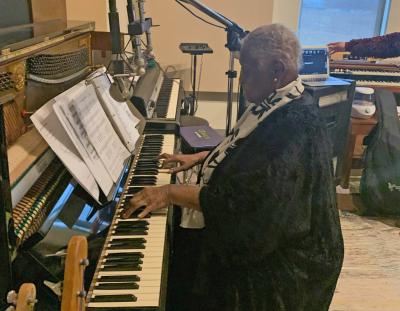 Yet time and distance haven't dimmed the happy memories of her time in Erie decades ago, when she lived with her sister Doris' family at the Britton Funeral Home at 1524 Peach St., one of the first Black-owned funeral parlors in Erie.

After graduating from Florida A&M College, she had to adjust to life in Erie. For one thing, she had never ridden a city bus. "In Clearwater, we walked everywhere with our friends. We walked to school, to shopping, going to church," she said in a recent phone interview.

She fondly remembers the warm welcome she received from her Erie relatives, and the good fortune that she moved here in June, rather than winter.

Her brother-in-law, Robert Bradley Britton, taught her how to catch the bus at 16th and State, near the funeral home. He also accompanied her to multiple job interviews. She finally landed work through Kelly Girl but was disappointed that the temp agency withheld so much of her pay as a fee.

One day in 1951 as she walked past the Federal Building across from Perry Square, she saw signs and flags promoting military service. "Tell me something about the military," she asked the man who greeted her.

"He went on explaining the benefits and all the travel and education I would get," she recalled. "'You've got to pass a written test, pass a physical, and go to basic training before you get these benefits. Still interested?'" he asked. "Yeah! Sign me up!" she replied.

Martha is fearless and funny. She learned computer skills at the library, and her interest in history and literature keeps her sharp. She counts Nathaniel Hawthorne and Maya Angelou among her favorite authors. "I read most of her books," she said, referring to Angelou. "The government just honored her with a coin."

Martha's story about a creative, well-lived life would be worth sharing at any time. But it particularly resonates in February, during Black History Month, when we cram centuries of neglected African-American history into 28 days.

Her memories add context to stories about forgotten Black entrepreneurs and the Erie neighborhoods that were razed for "redevelopment" and "progress," including the Peach-Sassafras area near the Britton Funeral Home.

Her story is also about a strong woman who treasures her military experience. "You form a sisterhood. You need each other in the military," she explained.

After enlisting, she took the train to basic training at Lackland Air Force Base in San Antonio, Texas. Her sister was sad to say goodbye, but Martha was happy about the opportunities that awaited.

She has detailed recollections of surviving bootcamp, because not all enlistees did. "A lot of the girls didn't make basic training. They couldn't adjust to roll call every morning at 500 hours," she said. "There were girls that were there one day and the next day they were done."

Following graduation, she worked in finance at the air defense command base in Colorado Springs, Colo., and later at a U.S. air base in Turkey.

Her military pride runs deep. Her late husband, Harvey, was an Air Force sergeant, and two of their sons are veterans: Steven is a retired Army lieutenant colonel and son David is a retired U.S. Marine warrant officer. Their son Timothy owns a contracting business in Oklahoma.

In 2018, she was selected to join other veterans on an Honor Flight to Washington, D.C., to tour the war memorials. She has also recorded an interview with a Library of Congress oral historian for its Veterans History Project.

Music is as much a part of her life as the military. At her mother's insistence, she studied piano as a child and majored in music at Florida A&M. (Now a university, the college was founded in 1891 in segregated Florida as the State Normal College for Colored Students.) She is well-versed in the story of Harry T. Burleigh, the famed Erie-born composer and arranger of Black spirituals, and she is a composer herself. Her Gospel hymn, "O Lord, Hear My Prayer," can be purchased at sheetmusicplus.com.

Returning to Erie after her military service, she studied at Mercyhurst College under the GI Bill and successfully auditioned as an alto for the Erie Philharmonic Chorus. Later, she would treat her sister Doris to season Philharmonic tickets. "Take a friend with you," she'd urge her sister. "You can discuss it and have someone to talk to. And don't take the same friend all the time. Move it around!"

Raised Baptist, she also played the organ at St. James AME Church and at Episcopalian, Lutheran, and Catholic churches in Erie, in addition to playing for funeral home services.

Interviewing for the organist job at Erie's Immaculate Conception Catholic Church, a Black parish, she told the priest, "Father, I have a Protestant background. I would have to have someone guide me through the order of the Mass." To that audition, she brought along "Lead Me, Guide Me," a Catholic African-American hymnal whose songs include many Burleigh arrangements. She still has the hymnal today.

In 2009, Immaculate Conception Catholic Church, at East 16th and Division streets, merged with St. Mary Church on East Ninth Street. When that combined parish closed in 2015, it merged with St. Stanislaus, another example of how Erie's Black history can fade away.

Today, there's a parking lot in the 1500 block of Peach Street where the funeral home once stood, just north of the ACL Lab in the former Central Mall, and across from the Charter School of Excellence in the former Professional Building.

A retired lawyer and one-time Erie mayoral candidate, Rob lives in Pittsburgh, where he hosts a prayer line for Greater Allen AME Church. Rob's request caught my attention because I've known him since we were Erie neighbors and his daughter attended St. Andrew's School at my Catholic parish.

Like barber shops and other businesses, Black-owned funeral homes are part of the social fabric of Black life in Erie, Rob said. People here know the names of Erie's Black preachers, but other stories "haven't been told," he said. For example, the Britton Funeral Home served those who could not afford Erie's more well-known funeral homes, Rob said. Others have confided to me that bereaved Black families weren't welcome at some Erie funeral homes.

His aunt urged him to take on the project to memorialize his family's funeral home business. "Aunt Martha said, 'Robert, this is what I want,'" he said.

Thanks to support and interest from the Hagen History Center and the city of Erie's new Historic Review Commission, the funeral home project is moving forward.

When the marker is ready, I look forward to meeting Martha. If we are lucky, we will get to hear her play her own hymns, as she did at her 91st birthday party on Martin Luther King's birthday.

Liz Allen, who sang alto in various church choirs, can be reached at lizallenerie@gmail.com