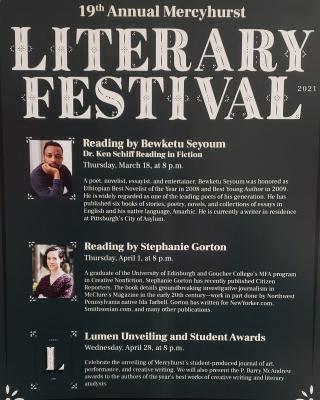 Mercyhurst University is about to get "lit" for the remainder of March and April. Its 19th annual Literary Festival kicks off Thursday, March 18 with the first of three events celebrating the craft and nuance of the written word.

Thursday night's Dr. Ken Schiff Reading in Fiction, named for the festiva's late co-founder, will feature the award-winning and controversial Ethiopian writer and entertainer Bewketu Seyoum. Later events include a reading from historical and nonfiction writer Stephanie Gorton on Thursday, April 1 and a student presentation on Wednesday, April 28. All events will be streamed live at 8 p.m. from the Mercyhurst English Department's Facebook page (facebook.com/mercyhurstenglish) and are free and open to the public.

Now that we have our basic outline, let's elaborate further:

It is the fate of many writers to go unheralded or unnoticed — but not Bewketu Seyoum's. Stirring things up tends to get people's attention, and Seyoum has done that aplenty throughout his six published works, which have included essays, poems, and short stories. Seyoum's bold, humorous, and fearless treatment of taboo subjects like political corruption, cultural repression, police brutality, and tribalism begat his exile from his native Ethiopia. The 2008 Ethiopian Best Novelist of the Year and 2009 Best Young Author has since taken up residency at Pittsburgh's City of Asylum, a nonprofit refuge for those whose voices were needed but perhaps not welcome in their native countries.

Another writer who garnered both the ire and admiration of her contemporaries was Titusville's Ida Tarbell, whose exposé of Standard Oil in McClure's helped bring down the Rockefeller empire in the early 20th century. She and the other "muckrakers" of McClure's thoroughly ticked off then-President Teddy Roosevelt and many of the other powers-that-were, but set a precedent for investigative journalism. Nonfiction writer Stephanie Gorton — who has published articles on NewYorker.com, Smithsonian.com, Los Angeles Review of Books, The Toast, and The Millions — will read from her 2020 book Citizen Reporters, which explores grassroots American news reporting during the Gilded Age.

The 2021 Literary Festival concludes with the unveiling of Mercyhurst's creative arts magazine, Lumen, select readings from lit-savvy Lakers, and the presentation of the P. Barry McAndrew Awards to the students who authored this year's best examples of creative writing and literary analysis.

Matt Swanseger, himself a former Creative Writing major, can be reached at mswanseger@eriereader.com