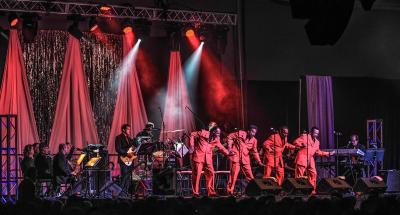 The Motown Experience, a conglomeration of three of Motown Recordsu2019 biggest acts (The Temptations, The Miracles, and The Capitols), will lend their sweet harmonies to the Warner Theatre for *A Motown Christmas.

Many of our parents and grandparents grew up with their childhood and young adult life framed by the sweet sounds of Motown Records. Timeless music from soul singers such as Diana Ross, the Four Tops, and the Isley Brothers became the soundtrack of the 1960s and beyond. Even today, the classics that were produced within Hitsville, USA are still being played by millions all over the world. And if you think that the legends of yesterday weren't ever in the holiday spirit, there's a CD somewhere with the Temptations' rendition of "Silent Night" that has comforted many homes across America. On December 2nd, the time capsule will once again open with the Motown Experience coming to Erie to take over the Warner Theater with A Motown Christmas. If you're unfamiliar with this collective, it is a musical conglomerate consisting of the past and present members of three of Motown's biggest acts — the Temptations, the Miracles, and the Capitols.

This show is bound to give audiences a taste of their holiday favorites as well as the group's own unforgettable gems — that set the landscape for music — and are guaranteed to have you singing along throughout the entire show. The Warner Theater will be howling soulful carols and chart-topping hits to get your Christmas started on a good foot — or two, if you're compelled to get up and dance, which none of the performers will mind. Nostalgia and new memories will blend perfectly as Charles Franklin (the Temptations), Dave Finley (the Miracles), George Wilson (the Capitols) and many others will captivate you with not only their rich vocal harmonies, but also their unmatched choreography — but that won't stop you from trying to imitate them once you get home. So whether you're more of a "Frosty the Snowman" person or a "Love Machine" fanatic, this night plans to take you back to a time where music, togetherness, and fun actually mattered. — Charles Brown

In Concert with Voters

by Matt Swanseger11/3/2020, 10:18 AM
This year's #iVoted Festival poised to be largest digital music event in history