Now Only will be a little more comprehensible for most listeners. 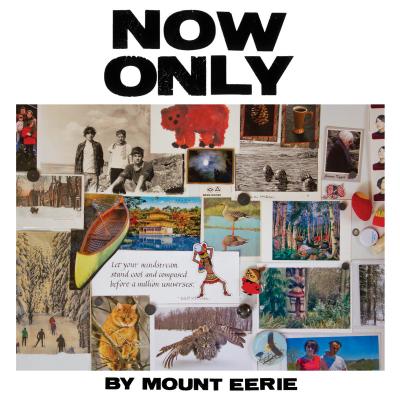 Despite being another potential masterwork in its own right, Now Only is a clear continuation and companion piece to last year's A Crow Looked at Me, an album that graphically portrayed the death of singer-songwriter Phil Elverum's wife. An album like A Crow Looked at Me is essential but not easy listening, a quality that Now Only also shares. It is at times a refreshing perspective on how someone can pick up the pieces and carry forward with their life — despite it being shattered in front of them. For the most part, Now Only is a slightly easier listen, picking up where the unflinching grief and despair of its predecessor left off and now addressing the things that come next: fatherhood ("Distortion"), art ("Two Paintings By Nikolai Astrup") and one's own mortality ("Earth"). A connection can be drawn to the extreme stream of consciousness of Sun Kil Moon's Mark Kozelek (this being Elverum's Universal Themes), but between Elverum's soft monotone and more traditional playing (see: the title track's hook), Now Only will be a little more comprehensible for most listeners.
— Aaron Mook