You may not have heard, but, on a recent Saturday, there was a strange sighting at the Bayfront Convention Center.

by Cory Vaillancourt
View ProfileFacebookTwitterGoogle+RSS Feed
May 15, 2013 at 7:00 AM 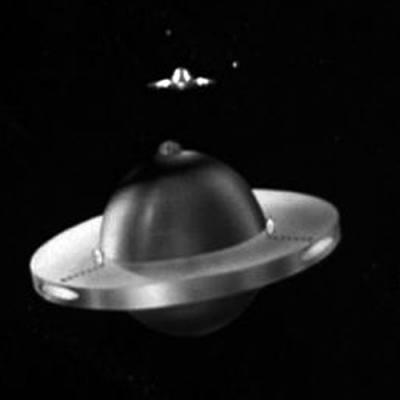 You may not have heard, but, on a recent Saturday, there was a strange sighting at the Bayfront Convention Center.

Partially concealed behind a large black photographic backdrop positioned near the end of the convention center's hallway that would – later that night – serve as the…umm…backdrop of many a McDowell Trojans' regrettable wallet-sized prom photo for lamentful decades to come was an odd sort of creature. Alien to this part of the galaxy, MUFON – the Mutual UFO Network, a nonprofit investigative organization founded in 1969 – had descended on Erie for its first-ever "Eerie UFO Conference."

I decided I had to go check out the landing site. I did, after all, call for Erie's economic development plans to incorporate a spaceport at the former GAF site in my regular column, Upfront. I'm also a proponent of draining and paving the bay for the purposes of spacecraft parking. Perhaps some of my developmental suggestions were gaining traction?

Politics aside, the stereotype of the UFO phenomenon as a whole tends to focus on the bad apples: the tinfoil hat-wearing, mom's basement-dwelling, conspiracy theory-hollerin' nerdlingers that end up spoiling the whole damn barrel of reasonable, intelligent inquirers.

I was in search of the former – the bad apples. I hoped to exploit, ridicule, and sensationalize their strange ways, because that stuff sells papers. Even free papers, like this one.

Unfortunately for me, John Ventre was there and was one of those good apples. He's the retired State Security and Public Affairs Director for UPS, and currently serves as the Pennsylvania State Director of MUFON.

"There's no doubt they're real," he said of UFOs. "Let's put it this way – 80 percent of the cases we get can be identified. About 10 percent are people hoaxing us, but then you get that 10 percent of good cases, and probably 3 to 5 percent are real UFOs."

Robin Swope, Pastor at St. Paul's United Church of Christ here in Erie and prominent local paranormal authority, agreed with Ventre. "I know they're real, but what are they? Are they aliens? Are they time travelers? Inter-dimensional? Demonic? Angelic? Who knows. But they are real."

"Eerie" Eric Fargiorgio, a talented artist at Midtown Tattoo also in attendance that day, similarly concurred with Swope and Ventre. "There are too many stories; if you do any kind of research on this, more than an hour's worth, you'll see it's not just bullshit. UFOs?  Yeah, definitely real."

Three completely normal people – a retired professional, a man of the cloth, and an artist – all with the same conclusion, and nary a tinfoil hat in sight. Ventre has a background in security and public affairs; Swope has a lifetime of study and devotion to stories of the supernatural; and Fargiorgio has an eye for appearances plus the skill to render them artistically. All are normal, working-class folk whose qualifications lend credence to their beliefs.

But the most highly-qualified apple in the room was the conference's keynote speaker, Stanton Friedman. Born in New Jersey in 1934, Friedman earned his bachelor's and master's degrees in physics from the University of Chicago in the mid-1950s, at a time when that particular school was still ground zero for the then-emerging field of nuclear research.

Upon graduation, Friedman worked as a nuclear physicist for 14 years with such industrial giants as Aerojet General Nucleonics, GE, GM, McDonnell Douglas, TRW, and Westinghouse, where he worked on classified projects including fission- and fusion-powered rockets and aircraft, as well as small nuclear power plants. After becoming interested in UFOs in the late 1950s, Friedman began presenting lectures about them in the late 1960s.

Since 1970, Friedman has worked as a full-time professional Ufologist; according to his bio, he's delivered lectures to "more than 600 colleges, and to more than 100 professional groups in 50 states, nine provinces, and 16 countries outside the USA…[and] published more than 80 UFO-related papers." He's also been called upon to present testimony to Congress, and has appeared at the United Nations twice.

"Some UFOs are alien spacecraft; we're dealing with a cosmic Watergate, and there's overwhelming evidence to support both positions," he told me. "My role is to lift the curtain, to get the facts out on the table, and to try to provide some sensible answers to the many questions people have. Man has a long history of assuming he's smarter than he is. It's important for mankind's future to realize we're not at the top of the heap. We like to think we are, but there's alien life all over the place out there, and almost all of it more advanced than we are."

So, on this strange Saturday, I did not find the apples I was looking for. Okay, there was one older woman sporting a pair of pipe-cleaner antennae, but I got the impression that was dailywear for her; however, what I really found was a sober, intelligent cross section of Erie listening to a scholarly lecture by a nuclear physicist.

Ventre called the event a success, and pledged that it would return around the same time next year. Maybe, as this event grows, it will become fringier. Maybe, as this event grows, there will be some bad apples for me to mock. But as the stereotypes of the tinfoil hat-wearing, mom's basement-dwelling, conspiracy theory-hollerin' nerdlingers rapidly subsided right before my very eyes, I wouldn't count on it.