MGMT, Chvrches, Bill Callahan, and Kings of Leon -- all reviewed by the bearded bards of the beat. 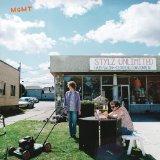 After the surprise success of MGMT's debut "Oracular Spectacular" in 2008, the duo of Andrew Vanwyngarden and Ben Goldwasser become indie superstars. However, the two of them have been distancing themselves from their first album ever since. After confusing fans with their sophomore release, MGMT's self-titled album pushes them even farther away from hit tracks like "Time to Pretend" and into what sounds like an angry, paranoid version of themselves. Perhaps tracks like the sluggish "Cool Song No. 2" and the languid "An Orphan Of Fortune" are closer to what MGMT truly was meant to be like, but in the end, "MGMT" sounds like Vanwyngarden and Goldwasser are trying to be weird to rub it in the faces of those that loved "Oracular Spectacular." The two can still write a catchy track, like the dreamy "A Good Sadness," but "MGMT" sounds like a band trying to pretend the past hasn't happened. - Alex Bieler

The Bones of What You Believe

So far, the members have Chvrches (pronounced like a place of worship, for those thrown by the "v") have made the right moves to earn themselves some positive Internet buzz, from the success of early single "The Mother We Share" to covering the "Game of Thrones" theme. Now all of the positive online whispers have led to the release of the Scottish synthpop trio's debut album, and "The Bones of What You Believe" delivers on the hype. Like fellow synth-happy bands M83 and The Knife, Chvrches serves up hook-laden pieces of electronic goodness, with singer Lauren Mayberry's emotive vocals leading the way. However, Chvrches don't quite reach for the heights that the aforementioned bands do, keeping the tracks more emotionally direct while Mayberry's vocals soar on tracks like "Recover" and "Tether," allowing "The Bones of What You Believe" to stay intimate in the realm of the electronic.  - Alex Bieler

Over the past 25 years, Bill Callahan has quietly proven himself to be one of the finest storytellers of his generation. His fourth album under his own name is no exception, and Callahan seems in no hurry on his latest release. "Dream River" manages to sound meticulously crafted all while words effortlessly part from Callahan's lips, his deep baritone adding heft to the simplest of lines. He's no stick in the mud, either, dealing out lines like "The only words I've said today are 'beer' and 'thank you'" on opener "The Sing." The painting that adorns the cover of "Dream River" seems appropriate, given how Callahan crafts his songs, deftly adding strokes like the uneasy flutes and flaring guitars in the standout track "Summer Painter," all while allowing the empty spaces in the music to provide depth when he tells a new tale that's no less hypnotic than the last. - Alex Bieler

Boozing, carousing, roughhousing – all the hallmarks of KOL's past work – are present here. But the Kings are more weathered and experienced now. Ten years ago, the young bucks broke onto the scene, billed as the "Southern Strokes." After two kick-you-in-the-face-and-makeout-with-your-girlfriend-and-give-you-something-to-dance-about records, the band began evolving ("Because of the Times"). The intensity remained and carried through to 2008's global smash "Only By The Night," which exposed the band to commercial success and fame. "Come Around Sundown" (2010) hinted at fatigue, frustration, and imminent failure, as the band struggled to meld their punk-rock-country-grunge roots with their anthem-esque pop-rock branches. A rawer effort than "Sundown," "Mechanical Bull" harnesses the band's early energy while proving they've learned some tricks along the way, which is to say that when grunge and pop sit down for a whiskey or seven together, it's a damn good time. - Ben Speggen