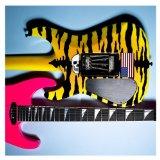 Although "Days Are Gone" is Haim's first album as a band, it's not even close to the California rock trio's first foray into the business. Sisters Este, Danielle, and Alana Haim have been actively performing and recording for nearly a decade, with the eldest two performing as Valli Girls back in their teens. The experience shows on "Days Are Gone," an impressively polished set of 11 tracks. Drawing from '80s soft rock and catchy pop-rock, the Haim sisters stuff each track with enough charisma to keep the listener glued to the speakers. Standout track "The Wire" shows just how well the sisters play off of each other, with Este and Alana supporting Danielle's lead vocals, each line perfectly in place. The performance would almost feel robotic if it weren't for the energy the sisters provide, making sure that there's some fun in the family business. - Alex Bieler

When Daniel Blumberg left Yuck after the band's excellent self-titled debut album, fans of the indie rockers became nervous. Then "Middle Sea" was released early, featuring four minutes of the same sort of fuzzy guitar hooks that enchanted listeners back in 2011, helping to ease their fears that without Blumberg, the band couldn't continue on as usual. However, it's the best Yuck has to offer on "Glow & Behold," as the rest of the album underwhelms. The band seems like it's in no hurry, and the results are rather bland. After seeming like a solid replacement for Blumberg's youthful yelps on "Middle Sea," Max Bloom's vocal takes sound dull on other tracks, making songs like "Rebirth" sound, in all honesty, boring. There are some solid moments that prove that this was once the band that put out one of the best albums of 2011, but "Glow & Behold" sorely misses the youthful exuberance of "Yuck." - Alex Bieler

Now on their third album of thundering power chords and sugary-sweet vocals, Sleigh Bells might be suffering from the law of diminishing returns. "Treats," the band's first album, was a loud and impressive debut, but the band's jersey-wearing jock jams for the indie crowd are starting to grow old on  "Bitter Rivals." The title track starts the album off on iffy footing, as singer Alexis Krauss awkwardly quotes "A Tale of Two Cities" while guitarist Derek Miller attacks his fret board. From there, the album seems patched together or forced on tracks like "Minnie" and "Sing Like a Wire." The album's high point actually comes from the least Sleigh Bells-like song on the album. A gentle, unrushed track, "To Hell With You" shows that there is some brain behind all of the band's brawn. Unfortunately for "Bitter Rivals," most of the muscle is more show than substance. - Alex Bieler

After the critical acclaim of both 2009's self-titled debut album and 2010's "Thank You Happy Birthday" follow-up, Cage The Elephant waited three years before releasing "Melophobia," leaving some fans to fear that a third album would fail to match the brooding intensity of the first two. Fear not, Cage fans; instead, delight in the return of one of indie rock's more distinctive troupes. Tracks like "Teeth" and lead single "Come a Little Closer" retain the gritty guitar work and warbling vocals found on past hits like "Aberdeen" and "Shake Me Down." But album stand-out "Telescope" reveals a mellower side of Cage, starting off as a Band Of Horses-esque slow burner that builds to a Modest Mouse-esque drum thumper. An honest album both embracing the past and welcoming the new, "Melophobia" should leave listeners hoping they won't have to wait another three years for new Cage material. - Ben Speggen