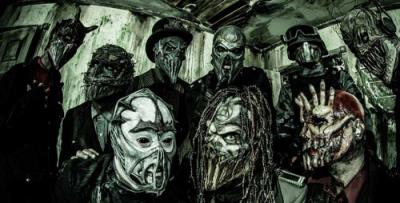 2015 will be a big year for Basement Transmissions, as two monster shows are already booked for January, the first of which being host to Cleveland-based nü-metal band Mushroomhead Thursday, Jan. 8, and the second being melodic hardcore heroes from Canada, Comeback Kid, later this month.

As for the former of the two, Mushroomhead is known within the metal scene for onstage antics, myriad band members, and grotesque masks (on par with the stylings of Slipknot). Since forming in 1993, the band has gained a loyal following and achieved worldwide success, touring and playing festivals all across the globe.

The nü-metal crew's 2013 album The Righteous & The Butterfly peaked at No. 1 on the Billboard indie charts and featured the return of founding member Jason Popson, aka "J Mann," who had left the band in 2004 to take care of his father. I had the chance to speak with Popson about his history with the Erie scene, the revival and future of nü-metal, the difference between playing festivals and clubs, and Mushroomhead's upcoming show at Basement Transmissions on Jan. 8.

Tommy Shannon: I read that you used to also play in the band Integrity, is that right?

Jason Popson: I was actually in a band called In Cold Blood with the members of Integrity, which was basically Integrity with a different lead singer. We also worked on an album with the guys from Integrity called Integrity 2000, which came out in I think 1999. So we definitely have some affiliations, but I was never an official member.

TS: Around that same time, like the mid – to late-'90s, that's when Erie's music scene really started to gain some exposure.

JP: Yeah! Wasn't it Brother's Keeper that was from Erie, right?

JP: Yeah, I remember Mike Ski from back in the day.

TS: So did you ever play in any of Erie's older venues with In Cold Blood or the earlier days of Mushroomhead?

JP: Not with In Cold Blood, but I did go to a show with the guys from Integrity. Integrity was playing in a VFW hall, or something like that. But back in the '90s, Mushroomhead used to come to Erie all the time. We used to play at Sherlock's – we have a long history there. We always loved coming to Erie; it was always a good time – the people at Sherlock's were great, and the turnout was awesome. A lot of kids couldn't go though, because of the bar. That's why a lot of the hardcore shows would be at the VFW, so the shows could be all-ages.

TS: Mushroomhead has played a bunch of festivals. Just this year you played Mayhem, Soundwave, and a festival in Russia during your first trip there. I've always wondered, what is it like going from those shows with thousands and thousands of people, and then going to comparatively smaller venues, like Basement Transmissions or Sherlock's, that max out at roughly a couple hundred people, or even less? Is that a weird transition?

JP: The one thing about festivals is that there's a lot more distance between the stage and the audience. I think we still love the feel of playing in a club. The crowd is much closer, there's a lot more interaction, and you can look people in the eye, as opposed to just a sea of faces. I definitely think it's a little more intimate. There are plusses and minuses to both, and it's awesome to be able to do both, because we kind of get the best of both worlds.

TS: The last thing I wanted to ask you was not that nü-metal ever completely died, but lately it seems like it's going through somewhat of a revival with Mushroomhead releasing an album this year, as well as Korn, Slipknot, and Nonpoint. System of a Down even ended its hiatus. What do you think is different about nü-metal this time around?

JP: I guess if anything, it's maturity. I think all the bands you named have grown as artists, you know? I don't know if I ever considered us to be 'nü-metal,' just because by the time we got a major record deal, that's what metal was called, but we kind of preceded nü-metal. Like when we started back in '93, it wasn't even defined yet. But the minute you put a sampler (DJ) on stage, all of a sudden you were a nü-metal band, you know? [laughs] But I think all the bands you named are cool, and I think it speaks a lot about the musicians involved just being passionate and determined and their drive to keep this music going.