A bad idea-turned hit thanks to the unlikely comic chemistry of Seth Rogen and Zac Efron. 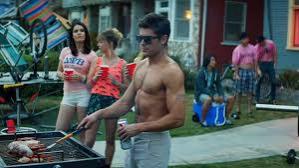 Director Nicholas Stoller's Neighbors was a bad idea. The idea of a film about a suburban couple facing off against an out-of-control local fraternity leaves us to imagine little more than a juvenile atrocity turned frustrating box office hit. Make no mistake, though – Neighbors is a hit, thanks in part to the unlikely comic chemistry of Seth Rogen and Zac Efron.

Struggling to accept that their lives are changing fast with the birth of their first child, Mac (Rogen) and Kelly (Rose Byrne) Radner try to enliven their boring suburban life with raves and exotic dining-room sex, meanwhile trying desperately to rationalize their lost youth, only to be hindered by their newborn baby. They have dreams of gay couples and Taco Bells coming next door, but instead they're met with Teddy (Efron) and Pete (Dave Franco) with an entire Delta Psi fraternity in tow as their new neighbors.

When they're invited to one of Teddy's parties, they get the jolt of life they're looking for, throwing all caution to the wind and recapturing the recklessness of their college years with booze, 'shrooms, dancing, and drunken gab (Teddy and Mac's under-the-influence dispute over who made the best Batman is comic gold). Once is enough for Kelly and Mac, though, who break the fraternity's trust when they call the cops the on one of their raucous parties when the illusion wears off and they're kept up all night by one of the fraternity's raucous parties.

With the whole neighborhood under frat occupation, there isn't a lot Kelly and Mac can do. Even their attempt to flood the brothers' basement in hopes of forcing them to move is met with obscenely creative problem solving that leaves Delta Psi with enough money to buy outdoor speakers and a hot tub to intensify their parties.

From here, the war of "Family vs. Frat" is constant anarchy. Writers Andrew J. Cohen and Brendan O'Brien throw in every joke they can, rarely stopping to take a breath. The result is extremely hit-and-miss, but the moments that do manage to live up to their sheer urgency work to killer effect. Neighbors gets bogged down in the occasional all-too-common innuendo, as well as heavy-handed sentimentality about parenthood and coming of age, but compensates with scenes of sporadic comedic glory. The scene in which the fraternity brothers throw a Robert De Niro-themed party outside the Radners' house just to bug them is pure hilarity, as is Rogen's impersonation of Ray Ramano to lure the public into one of Delta Psi's parties; Delta Psi's revenge-by-airbag prank unfolds in a series of priceless slapstick episodes.

Neighbors is an enjoyable comedy with its heart in the right place, even when it loses it and trails into territory where far too many college comedies have gone before. It's a delight to see heartthrob Efron pull his weight with the comedic genius of Rogen. He's no career comedian, but with Rogen to guide him, he comes admirably close to fooling us. Neighbors isn't a great comedy, but it's a heck of a way to pass the time if you're waiting for one.

Eric Kisner can be contacted at eKisner@ErieReader.com