The Downtown YMCA has a new mural. 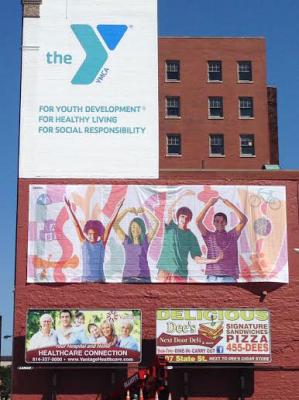 The YMCA on 10th and Peach streets erected a new mural by local artist Todd Scalise on July 11. The mural is 55 feet by 21 feet and depicts children spelling out "YMCA" with their arms in the organization's corporate identity colors.

The mural was printed on vinyl and is meant to be replaceable in an effort to create a sort of workable community art space that would allow future murals to take its place. The tall building was originally covered by a previous mural depicting members of the Y's staff, but when the painting started to deteriorate, it became clear that it was time for something new.

Tammy Roche, vice-president of the YMCA, said that Scalise was a natural go-to for the project, and having spent time getting to know the Y, he was able to really capture the spirit of the YMCA and what they stand for in his work. The colorful image adds life and excitement to the scenery of downtown Erie.